Ukraine is one of Europe's biggest suppliers of wire harnesses, which essentially helps to group together the maze of cables running through every car and is known as the vehicle's central nervous system.
By : HT Auto Desk
| Updated on: 26 Mar 2022, 08:24 AM 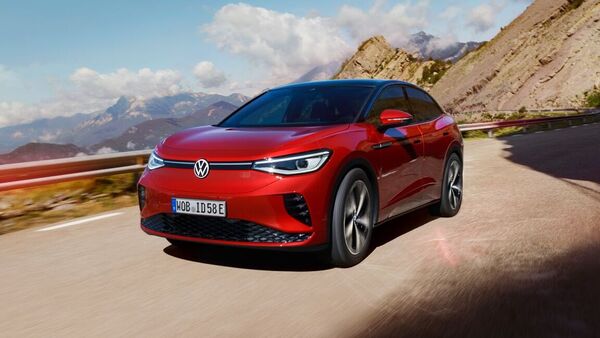 Volkswagen ID.5 GTX offers a range of around 480 kms on a single charge.

Volkswagen will have to postpone the launch of its ID.5 electric SUV in May due to lack of supply of key auto parts like wiring harnesses. With the war between Russia and Ukraine halting deliveries of crucial car parts, Volkswagen and its suppliers are scrambling to find solutions abroad. According to reports, the German carmaker is still unable to produce enough ID.5 electric vehicles to get the models into dealerships for use as show and display cars.

Ukraine is one of Europe's biggest suppliers of wire harnesses, which essentially helps to group together the maze of cables running through every car and is known as the vehicle's central nervous system.

The news of delay in launch of ID.5 electric SUV came directly from a letter that Volkswagen sent to its dealers. "To ensure that all partners are treated equally, vehicles that are already at the destination station have not been delivered," said the letter. "To ensure the national availability of vehicles for each agent, we will redistribute some of the exhibition vehicles," it added.

Russian invasion of Ukraine has generated a significant reduction in supply of cables and other auto components. This is one of the reasons why brands such as Porsche and Audi also stopped production in certain plants. Volkswagen too had to trim production ever since Russia's invasion last month forced many Ukrainian factories to close, holding up supplies of car components across Europe.

Volkswagen ID.5 electric SUV, along with the sporty ID.5 GTX, is being produced at the carmaker's Zwickau plant in Germany, where production was temporarily suspended due to supply bottlenecks caused by the war in Ukraine. It is expected to resume next week.

Murat Aksel, VW's board member for purchasing, said, "We are keeping our suppliers in Ukraine. We are currently creating capacities outside Ukraine because no one knows if the war will spread west or how long it will last."

Volkswagen ID.5 is based on the company's dedicated EV architecture MEB, the same that underpins its ID.4 electric SUV. The ID.5 sports a sloping roofline and featuring a twin-motor AWD setup with 108 hp and 162 Nm of torque at the front axle, as well as 201 hp and 310 Nm of torque at the rear. ID.5 Pro can sprint from zero to 96 kmph in 10.4 seconds whereas the Pro Performance can touch the speed of 96 kmph from stationary in 8.4 seconds. The company had also said earlier that ID.5 Pro Performance variant can cover a distance of 520 km on a single charge.