Renault will launch the Kiger SUV in India later in 2021. It will be placed in the hotly-contested sub-four meter SUV category which is currently ruled by the likes of Kia Sonet and Hyundai Venue.
By : HT Auto Desk
| Updated on: 28 Jan 2021, 05:06 PM 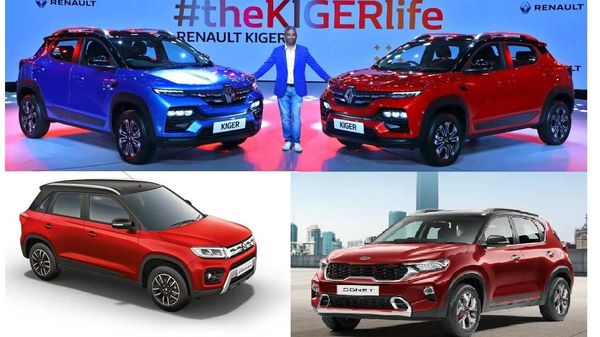 Prices of the Renault Kiger SUV will be announced in the month to come.

Renault on Thursday revealed the new upcoming Kiger SUV which is expected to set foot in the market in the next few months. The Kiger will be placed in the hotly-contested sub-four meter SUV category which is currently ruled by the Kia Sonet. Kia's subcompact rival was introduced in India last year, and it is a technical cousin to the Hyundai Venue. Not to forget, Maruti Suzuki's Vitara Brezza has also been a strong seller until it was dethroned from its leading position in the segment.

The final production-spec version of the Kiger draws heavily from its concept which was made public in the past. It gets the same high-bonnet stance with sleek looking DRLs placed on the top, horizontally stacked ice-cube styled headlamps, aggressive-looking black coloured bumper design and much more. It has also been given funky-looking alloy wheels, a dual-tone roof, and a very hunched over stance which is evident from its rear glass and tailgate. Over the back, the inverted C-type LED tail lamps, along with a very sharp and bold bumper also lend it an aggressive appeal.

Here's a peak into the unveiling of the #Kiger sub-compact SUV from @RenaultIndia. It seeks to challenge the likes of Vitara Brezza, Venue, Nexon, and KUV300 pic.twitter.com/Fl1dUlX7j7

Overall, Renault has really taken the good bits out of the design from its popular Kwid entry-level crossover and infused it into a bigger model. The Kiger does manage to stand out with its bold and unique exterior styling.

Renault also announced the official dimensions on the SUV which stands 3,991 mm in length, 1,750 mm (without mirrors) in width and 1,600 mm (with Roof Bars) in height. It has a wheelbase of 2,500 mm, while the kerb weight stands at 1,012 kg. The ground clearance of Renault's upcoming SUV has been measured at 205 mm, while the boot volume has been rated at 405 litres.

In comparison, the Kia Sonet and Maruti Vitara Brezza, both stand longer and wider at 3995 mm, and 1790 mm, respectively (both share the same length and width. Maruti Vitara Brezza is the tallest of the lot at 1640 mm, while the Sonet stands 30 mm less at 1610 mm. The wheelbase remains constant across all three cars at 2,500 mm.

While the Kia Sonet has a boot space volume of 392 litres, the Maruti Vitara Brezza features a measly 328 litres of boot. So the Renault Kiger takes the trophy in the boot space department.