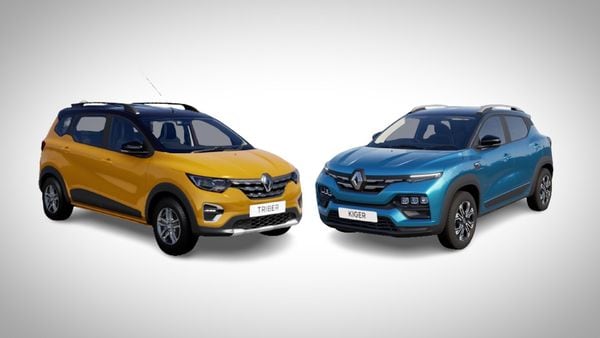 Renault has hiked the prices of the Kiger SUV and Triber MPV by up to almost ₹30,000 for certain variants.

French carmaker Renault has increased the prices of two of its flagship models in India. The Kiger sub-compact SUV and the Triber MPV have received price hikes this month, which made these two cars costlier by up to almost ₹30,000.

Renault had launched the Kiger SUV in India in February last year. The launch price of the SUV was at ₹5.45 lakh (ex-showroom), which made it the most affordable sub-compact SUV in the market. However, after the latest price hike, Kiger's technical cousin Nissan Magnite has become the most affordable sub-compact SUV with a starting price of ₹5.76 lakh (ex-showroom).

The highest spike in Kiger prices is ₹29,000 for the 1.0-litre RXT EASY-R automatic dual tone variant. It now costs ₹8.01 lakh (ex-showroom, Delhi). Almost all the variants of the Kiger subcompact SUV have received price hike. The least hike has been on the 1.0-litre RXZ X-TRONIC Turbo with CVT variant which has become costlier by ₹10,960 at ₹9.99 lakh (ex-showroom, Delhi).

Renault Triber MPV, which is considered as one of India's safest seven-seater models after it secured a four-star rating at the Global NCAP crash tests last year, has also received significant price hikes. Price of Triber has gone up by nearly ₹30,000 for some variants.

The base variant of the Triber MPV, the RXE trim, has received the least hike among all variants. It is now costlier by ₹19,000 after the prices were revised to ₹5.69 lakh (ex-showroom, Delhi) from ₹5.50 lakh earlier.