Porsche celebrates 'birthday' of three of its most iconic models 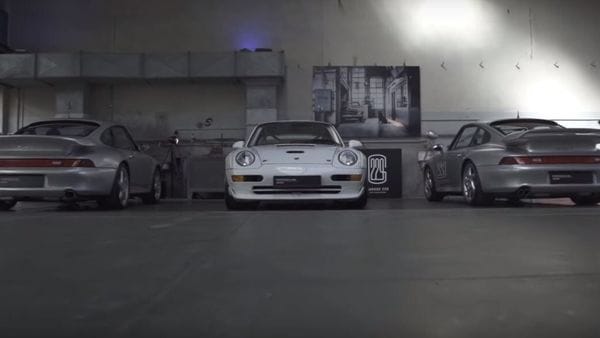 Photo grab from video posted on Youtube by Porsche.

There was no cake but it was quite a birthday party nonetheless over at Porsche recently when the iconic sports car maker celebrated the anniversary of three of its most iconic cars - a 918 Spyder Concept, a 993-series 911 Turbo, and a 718 RS 60.

Over 60 years ago, in March, Porsche had driven in the 718 RS 60 race car which would go on to win not just accolades and trophies but unwavering admiration as well. The 993-series 911 Turbo was showcased 25 years back and is rated as one of the best in the air-cooled 911 series from Porsche. And the third to celebrate its birthday was a 918 Spyder Concept, first showcased 10 years ago, at the Geneva Motor Show in 2010. It made use of a normally aspirated 3.4-liter V-8 that belted out 500 horses. The car, however, stole the show for its extremely contemporary looks.

Porsche, therefore, took the opportunity to celebrate the aluminum, silver, and diamond anniversaries all together. The three cars basked in the limelight as photo shoots were arranged and each of the cars appear to have been given an additional coat of wax and other protective elements.

Now that is a real party even as Porsche and several other car makers keep production lines temporarily suspended due to the coronavirus pandemic.