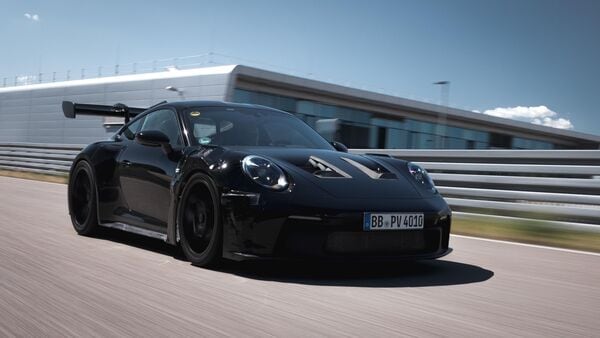 Porsche 911 GT3 RS will pack a four-litre, six-cylinder boxer engine that is capable of churning out 500 PS of maximum power.

Porsche is all set to drive in the new top-of-the-range 911 GT3 RS sports car. The luxury carmaker will make the official debut of the 911 GT3 RS on August 17. The 911 GT3 RS, which has been inspired by the 911 RSR and 911 GT3 R GT racing cars, will essentially be a street-legal racing car.

Announcing the details about the unveiling event next month, Andreas Preuninger, Director GT Model Line at Porsche, said, “The new 911 GT3 RS is even more optimised for track use than its predecessors. The spontaneously responsive, high-revving four-litre, six-cylinder boxer engine with approximately 500 PS has proven ideal for use at trackdays and club sport events."

The new Porsche 911 GT3 RS, as the name suggests, is the improved high-performance version of the 911 GT3. Under the hood, the sports car will come with a four-litre, six-cylinder boxer engine that is capable of churning out 500 PS of maximum power. For reference, the Porsche 911 GT3 is also powered by a 4.0-litre naturally aspirated engine capable of generating 502 horsepower. It can sprint from zero to 100 kmph in a little over three seconds and hit a top speed of 317 kmph.

Porsche 911 GT3 RS is expected to get bespoke P Zero Trofeo RS Pirelli tires, active aero with F1-style rear wing. The cabin of the 911 GT3 RS will be characterised by a steering wheel which will feature multiple dials to control output. The GT3 RS is also expected to come with tweaked suspension, throttle and other drive dynamics. “That's why we focused primarily on aerodynamics and chassis questions in the development of the new 911 GT3 RS," said Preuninger.