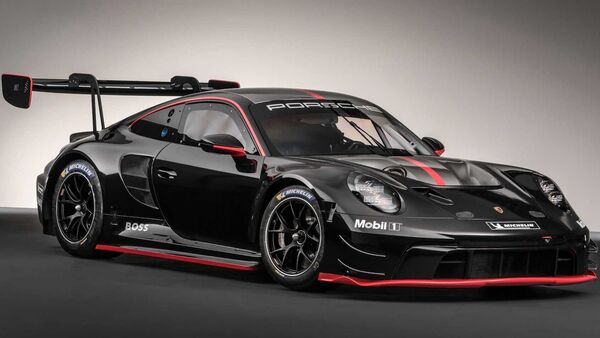 Porsche has uncovered its 911 GT3 R race car ahead of its track debut next year. The GT3 sportscar's development commenced in 2019, and it is based on the 992 general models. The new model claims to come with improved driveability, streamlined handling and reduced running costs as well. The new Porsche 911 GT3 R comes promising additional power output, while the aerodynamic efficiency of the model too has been improved significantly.

In an attempt to make the new 911 GT3 R more attractive for drivers, the German luxury car brand has made several mechanical adjustments. It comes with a new suspension and more precise steering. This results in reduced wear on the rear tyres. The KW shock absorbers come available in five different adjustment settings. At the front, it gets double-wishbone and multi-link at the rear. The suspension setup allows the car to have an elevated underbody that helps airflow to reach the rear diffuser without significantly increasing drag.

At the rear, the rear wing gets a swan-neck mount, further improving the car’s aerodynamics. The wheelbase of the 911 GT3 R has been extended in order to ensure better handling and lower tyre wear. The carmaker has moved the rear wheels further back, extending the wheelbase from 2,459 mm to 2,507 mm.

The power source for the new Porsche 911 GT3 R is a 4.2-litre naturally aspirated flat-six engine, which is up from 4.0 litres in size. The engine can produce up to 565 hp power output, which routes through a sequential six-speed contest-mesh gearbox with paddle shifters, which has been derived from the 911 GT3 Cup race car. This engine is tilted by 5.5 degrees towards the front of the car in an attempt to make enough space for the underbody diffuser. It also helped the car's weight balance.