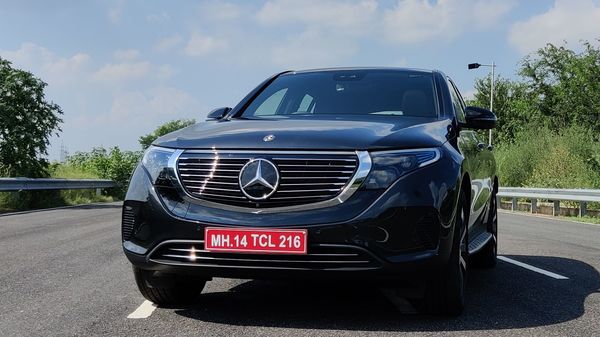 The EQC from Mercedes was the first EV to enter the luxury space in India.

Nearly a year after driving in its first-ever electric vehicle anywhere in the world, in India, Mercedes-Benz on Thursday announced plans of taking its EQC SUV to 50 new cities in the country. The EQC is brought in via the CBU route and has been received well in the niche luxury EV segment.

Mercedes EQC was first launched in India towards the end of 2020 and in six metropolitan cities. These six metropolitan cities will now be the base for retail for EQC in 50 other cities spread across the country. At the same time, the German auto giant is assuring that more of its dealerships and workshops would be able to cater to questions from prospective buyers as well as carry out service works. These are spread in 50 cities and across 94 locations. “Pioneering the luxury EV market in India with the EQC was an important decision for us and a step taken in the right direction," said Martin Schwenk, MD and CEO at Mercedes-Benz India. “With the growing customer demand for the EQC, we are now expanding our EV penetration to 50 Indian cities, covering our entire retail network spread." EQC has a range of around 350 kilometres on a single charge. (HT Auto)

The bookings for the next batch of Mercedes EQC has also been opened from Thursday. The first batch was sold out soon after the launch and the next lot of customers can continue making use of online channels to make bookings.

The Mercedes EQC was the first battery-powered luxury car in India and while rivalry against Jaguar iPace and Audi e-tron and e-tron Sportback has spiced up the small but significant segment, Mercedes is still highlighting its first-mover advantage. Since launch, the EQC had received an upgraded 11 kW on-board charger which allows the 80 kWh battery to be powered from 10% to 100% in 7 hours and 30 minutes instead of the previous 11 hours.

Priced at around ₹1 crore, the EQC - or any of its direct rivals - aren't really for the average luxury car buyer. And yet, the response that these vehicles are getting shows there are select takers for battery-powered luxury vehicles here. Little wonder then that Audi is now gearing up to expand its range with the e-tron GT while Volvo too has plans of driving in its XC40 Recharge early next year.