Urban Cruiser sub-compact SUV will be Toyota's second spin-off of a Maruti Suzuki car, the first being the Baleno hatchback which has been rebranded and marketed by the Japanese carmaker as Glanza.
By : HT Auto Desk
| Updated on: 22 Aug 2020, 12:26 PM 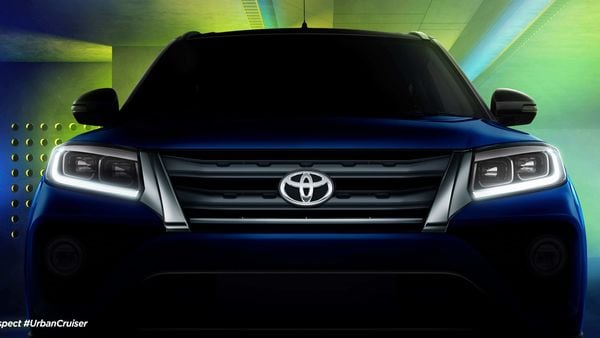 Toyota Kirloskar Motor has officially opened bookings for its upcoming sub-compact SUV Urban Cruiser on the occasion of Ganesh Chaturthi today. The new Urban Cruiser SUV can be booked for an amount of ₹11,000. The SUV is expected to be launched around the festive season.

Urban Cruiser will feature both manual as well as auto transmission but it is the automatic which will get the Li-ion battery which would allow for features such as torque assist, regenerative braking and idle start/stop. This is expected to give the automatic variant of Urban Cruiser better fuel efficiency although the mileage figures have not yet been officially revealed.

That Urban Cruiser will get 1.5-litre petrol engine under the hood has also been previously confirmed and the automatic variant will have Li-ion battery which would allow for features such as torque assist, regenerative braking and idle start/stop. The brochure however confirms that the car will be offered in six monotone and three dual-tone colour options.

Even before the launch, significant details about the Urban Cruiser SUV have already been leaked, providing a clear idea of how Toyota's spin-off of Maruti Suzuki Vitara Brezza will look like.

The leaked brochure reveals that the Urban Cruiser will have a slightly different face than that of the Brezza with the focus apparently on giving it a more aggressive appeal. The face is appears more pronounced and the grille gets two wide horizontal slats while the bumper gets sizeable faux air vents. The head lights, however, appear identical to the one found on the Brezza.

The similarity appears to continue over to the indicator-mounted side mirrors and the LED tail lights and a stop light-mounted roof spoiler. Even the alloys on the 16-inch wheels appear identical.

Expect Toyota to price the Urban Cruiser slightly above the Brezza from Maruti because it would seek to position itself as being slightly more premium. When launched, the Urban Cruiser SUV will not only take on Maruti Suzuki Vitara Brezza, but also the likes of Hyundai Venue, upcoming Kia Sonet and Nissan Magnite among others in the fiercely competitive compact SUV segment.