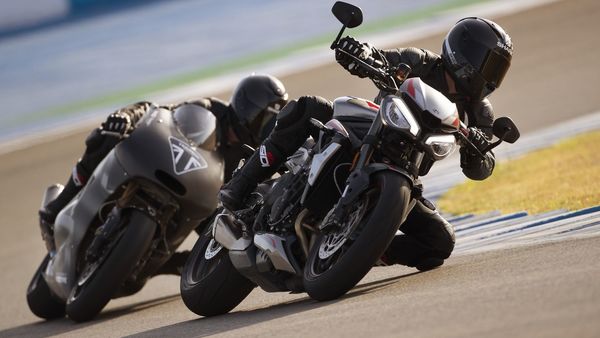 Triumph Motorcycles will launch the new Street Triple RS in India on March 25. The bike has already been revealed internationally and it comes out as a fairly updated model over the current version it is set to replace.

On the outside, the new Street Triple RS carries evolutionary design changes. It now gets tweaked LED headlamps with integrated DRLs which make the front-end more appealing. Also, some of its body panels have been updated to lend it more aggression. It now looks sportier thanks to the newly tweaked elements such as flyscreen, side panels, rear unit, seat cowl, and belly pan.

While the meter console remains the same large TFT screen as before, however, it now gets a host of updates from newer graphics, Bluetooth connectivity and GoPro controls.

As far as mechanicals go, it runs on a 765cc, liquid-cooled, in-line triple engine which is known to develop 123 PS of maximum power and 79 Nm of torque. In comparison to the previous model, the overall torque rating is up by 2 Nm from the last model's 77 Nm. The company claims that beside the higher torque figures, the bike now also benefits from a stronger mid-range power delivery. The engine, as before, utilizes the same 6-speed gearbox with an up/down quickshifter.

Its equipment list includes features such as Brembo M50 Monobloc calipers, a fully adjustable Showa fork and an Öhlins STX40 rear monoshock. Its wheels come shod to Pirelli’s latest-generation Supercorsa SP V3 tyres as standard. 'RS' being the top-crop in the company's Street Triple range, comes kitted with a host of electronic rider aids which make it unique. But what's rather surprising to note is that it still misses out on the IMU-assisted electronics. Triumph has officially stated that the inclusion of an IMU would have raised its pricing significantly.

As far as pricing goes, the current-spec Street Triple RS retails at an ex-showroom, Delhi pricing of ₹11.13 lakh. And it goes without saying that the new model will be priced higher than this.