New Rolls-Royce Ghost's illuminated fascia brings to life a glowing Ghost nameplate surrounded by more than 850 stars in the interior suite of the new car.
By : HT Auto Desk
| Updated on: 26 Aug 2020, 05:49 PM 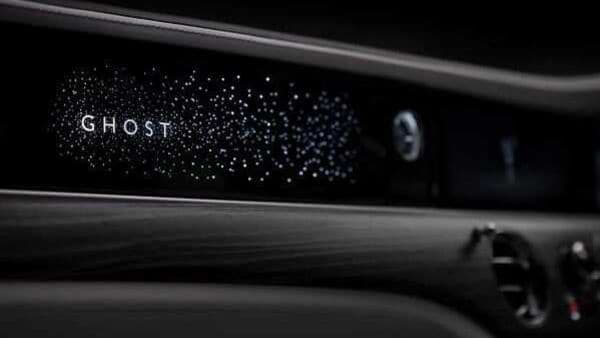 Rolls-Royce has announced that the next-gen Ghost will be digitally revealed on September 1. Ahead of the unveiling of the car, the company has revealed the first bespoke feature for the new Ghost. It will get an illuminated fascia featuring a star cluster, located on the passenger side of the dashboard.

The illuminated fascia brings to life a glowing Ghost nameplate surrounded by more than 850 'stars' in the interior suite of the new car. However, the constellation and 'Ghost' word-mark are completely invisible when the car is not in operation. Rolls-Royce says the new feature has been developed over the course of two years and more than 10,000 collective hours.

(Also read: As silent as shadow: Rolls-Royce's new Ghost will be one of the quietest cars)

The illumination has been achieved by 152 LEDs mounted above and beneath the fascia, which have been colour matched to the cabin’s clock and instrument dial lighting. To ensure that the Ghost graphic is lit evenly, a 2 millimetre-thick light guide has been used, featuring more than 90,000 laser-etched dots across the surface. This not only disperses the light evenly but creates a twinkling effect as the eyes move across the fascia.

The bespoke feature echoes the brand's decision to pursue a Post Opulent design direction with the new Ghost. The emphasis is on giving the car a minimalist yet luxurious appeal. "The hidden-until-lit feature (illuminated fascia) hides the complexity required to create a sense of effortless luxury with a simple decorative statement," says Lead Bespoke Designer at Rolls-Royce, Michael Bryden.

To ensure that the illumination is completely invisible when the vehicle is not operational, three layers of composite materials have been used. A Piano Black substrate layer has been laser etched to remove the black colouring and allow light to shine through the nameplate and star cluster. This is then overlaid with a layer of dark tinted lacquer, hiding the lettering when not in use. Finally, the fascia is sealed with a layer of subtly tinted lacquer before being hand polished to achieve a uniform 0.5mm thick, high-gloss finish, matching other high gloss accents incorporated into the interior.