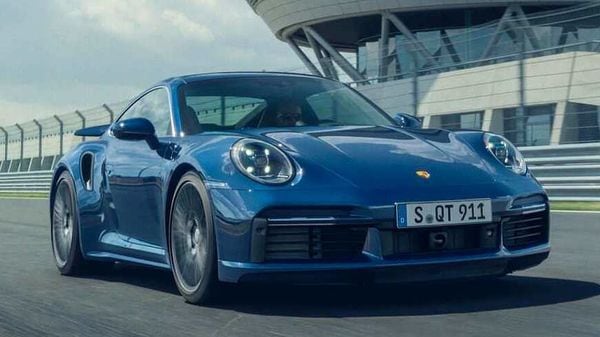 After the top-spec 911 Turbo S version earlier this year, Porsche has now unveiled the new-generation 911 Turbo in Coupé and Cabriolet forms.

The engine transmits power to all the four wheels via an 8-speed PDK dual-clutch auto gearbox. Its Porsche Traction Management active four-wheel drive system is now capable of sending more torque to the front axle. The company claims that the engine now revs more freely and has an improved throttle response. It has received two variable-geometry turbochargers with electronically controlled valves which adjust boost levels in order to match the engine speed and load.

The car also comes with Porsche Active Suspension Management (PASM) as standard. This system is said to aid balance between comfort and responsiveness. There is also an optional PASM Sport system which stiffens up the suspension and simultaneously drops the ride height by 10 mm to deliver a sportier ride.

On the inside, it features an interior similar to the other cars in the 911 line-up. Speaking of which, it gets a 10.9-inch central infotainment screen as well as Porsche’s ‘Advanced Cockpit’ digital display.

(Also Read: Porsche Taycan to get these tyres specially developed for electric vehicles)

In India, the Porsche 911 range starts from the Carrera and Carrera S, both the models have been priced at ₹1.82 crore and ₹1.99 crore, respectively. The firm also introduced the top-spec 911 Turbo S in the country at ₹3.08 crore. Since the company already has an extensive 911 line-up in India, chances are that the new Turbo will also be launched in the months to come.