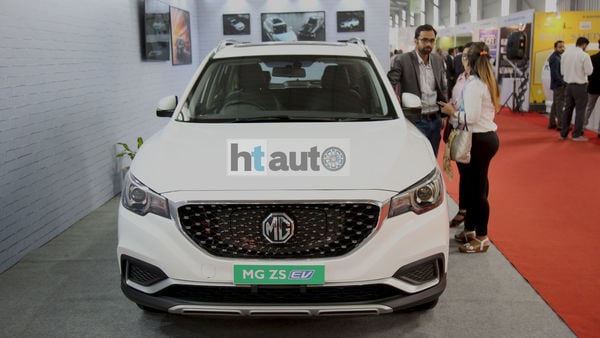 NEW DELHI : With the promise of changing the electric vehicle game in India, MG Motor is padding up to bring in the highly-anticipated ZS EV here on December 5. Just a week before the official launch, however, the company displayed the car at the NuGen Mobility Summit that was held on Wednesday and Thursday at Manesar in Haryana.

Hosted by International Centre for Automotive Technology (iCAT), the NuGen Mobility Summit brought together industry, research and academic experts in an event focusing on current and upcoming smart and green technologies. Little wonder then that the ZS EV was a major highlight considering the clean electric option it has to offer. The ZS EV will take on Hyundai Kona. (HT Auto)

When launched, the ZS EV will take on Hyundai's Kona. Its all-electric motor is capable of generating 148bhp of power while the 45.2 kWh battery can give the SUV a stated range of 428 kms. In comparison, Kona has a claimed range of 452 kms.

Electric cars are still a very rare breed in India and MG would be hoping to capitalize on this. The company has already set up several charging stations - supporting infrastructure remains a concern for EVs in India. It recently announced of a partnership with Exicom to reuse batteries once they have gone through their entire life cycle inside the ZS.