MG Motor is set to drive in the new Gloster SUV ahead of the festive season, and is set for launch in October.
By : Sabyasachi Dasgupta
| Updated on: 24 Sep 2020, 03:13 PM 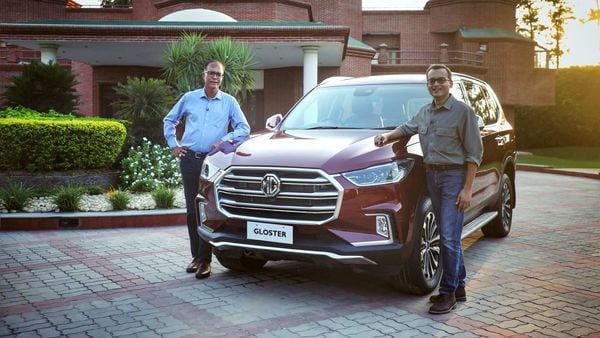 MG Gloster, a luxury SUV with off-roading capabilities, has been unveiled.

MG Motor has announced that the pre-bookings for its upcoming Gloster SUV, India’s first Autonomous (Level 1) luxury SUV, is now open. MG Gloster can be pre-booked with an amount of ₹1 lakh. Launch of the MG Gloster SUV is slated for next month.

MG Gloster is winding up for a big launch around the festive period and has even bigger ambitions of taking on a host of luxury car offerings in the Indian market. As such, while the promise of luxury is omnipresent, MG claims Gloster will also have the capabilities of tackling a wide variety of road conditions and is looking at highlighting the SUV's off-road capabilities.

Powering the MG Gloster is a new, 2.0-litre, twin-turbo diesel engine that makes 218hp and 480Nm of torque. It gets an 8-speed automatic gearbox and a 4WD system with four off-road drive terrain modes - sand, rock, snow, mud. It also gets three drive modes - eco, sport and auto. The Gloster SUV will alsio have 19-inch wheels.

Gloster SUV is is a full-size SUV which is packed with features like leather seats, a large 12.3 inch infotainment screen in the centre with Android Auto and Apple CarPlay compatibility, 12 speakers and 64 different colour options for ambient lighting. It also gets the brand's latest i-Smart 2.0 AI assistance technology with 3D maps and new apps.

Among the safety features, MG Motor will introduce the BSD system (Blind spot detection system) in the Gloster SUV. The system uses a range of sensors and cameras to keep the driver informed about objects that are outside the field of view. Besides the BSD system, Gloster SUV will also have lane departure warning system. A small camera fixed near the rear-view mirror will help the driver to stay informed whether the SUV is veering off its lane or not.

The Gloster was first showcased at the Auto Expo 2020. It is nothing but a rebranded Maxus D90 which sells in the Chinese market. It is also marketed as the LDV D90. For the uninitiated, Like MG, Maxus and LDV are also subsidiary brands of SAIC.

MG is openly calling out capabilities of established off-road champions like Toyota Prado and Mitsubishi Pajero, and is pitching Gloster as a capable challenger to these vehicles.