Mercedes is promising a hassle-free ownership experience with the EQC, its first all-electric offering in India.Mercedes EQC has been initially launched in six cities and this will be expanded to include other cities as well.
By : Shubhodeep Chakravarty
| Updated on: 08 Oct 2020, 20:00 PM 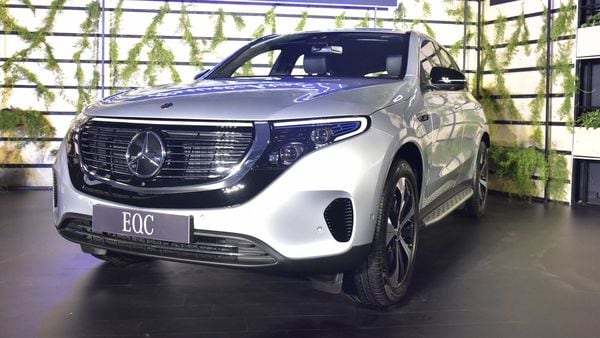 Mercedes EQC has been brought to India via the CBU route.

Mercedes Benz has forayed into uncharted territory with the launch of EQC electric SUV which becomes the first EV product in the Indian luxury car segment. With a price tag of ₹99.30 lakh (ex showroom), it is not quite affordable and the price is also only for the first 50 customers. And yet, it is a massive show of intent from the German giant at a time when a few others have openly admitted that the Indian market may not be currently ready for EV products.

The EQC carries all the advancements that Mercedes has been making in terms of a drivetrain that is unlike what it has been known for over the course of past several decades. The EV is also almost 2.5 tonnes with the battery pack itself weighing over 650 kilos. But it seeks to bring a whole lot to the roads with a claimed range of over 450 kilometres and the promise of allaying any concerns that the new EV buyer may have here in the country.

Most significantly, however, is an industry-first eight years' cover on the 80 KwH battery and a wall box charging unit which has been bundled into the cost of the EV itself. Then there is an assured buy-back plan at the end of three years from the date of purchase.

Mercedes is well aware that even in the luxury space, there can be concerns from buyers when a rather new technology is concerned but states it is working towards ensuring its service network is up to the challenge. "In the first phase, the EQC will most likely be bought by people who already have a luxury car in their garage," Santosh Iyer, Vice President, Sales and Marketing at Mercedes-Benz India told HT Auto. "In subsequent phases, gradually, first time buyers will start looking at the EQC with more interest. The market is ready, people want an EV like this which is also why we have brought in the EQC here."

Iyer admits that range-related issues may exist but that the EQC is more than capable of being a regular city commute option with the ability to much highway miles. "See, you can drive it from Delhi to Chandigarh, charge it for some time overnight and drive it right back," he explains, adding that the support infrastructure for EVs in the country are constantly improving. (Full interview here)

The launch of EQC is only in six cities in phase one - Delhi, Mumbai, Pune, Bengaluru, Chennai and Hyderabad. This will be gradually expanded to other cities. And while the launch itself marks a turn from the usual for Mercedes, the entry of EQC bodes well for the luxury EV segment and may possibly get rival and competing brands to showcase their offerings here.