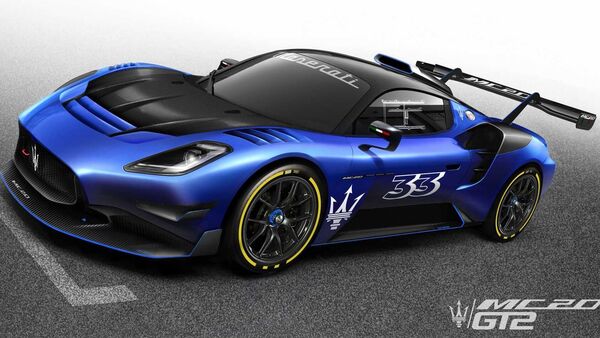 Maserati MC20 GT2 comes with a host of accessories.

Italian luxury car marquee Maserati is aiming to return to the GT2 circuit next year with its MC20 GT2, which comes as a hot and more performance-focused version of the sportscar. The MC20 GT2 comes as the successor of the MC12, which had great runs in the FIA GT2 championship between 2004 and 2010. The sports car is based on the road-going production version of MC20, the GT2 variant comes meeting FIA regulations as a single-seater non-road-legal race car.

The Maserati MC20 GT2 gets power from a derivative of the Italian car brand's new 3.0-litre twin-turbocharged V6 engine. The automaker is yet to reveal any power output specification. Maserati claims that a base version with 630 hp peak power is currently under development. It gets a wide range of accessories in an attempt to become worthy for the GT2 circuit. It gets a six-point racing safety belt, carbon fibre steering wheel, in-car camera, air conditioning, tyre pressure monitoring system and adjustable racing ABS.

It also comes with a six-speed sequential racing transmission with paddle shifters, which sends power to the rear wheels. Other elements include a racing clutch and a limited-slip self-locking mechanical differential to help the car with traction, while a GT2-homologated racing body kit is there ensuring maximum aerodynamic downforce. Maserati claims that further changes to the equipment are possible during the vehicle development.

Speaking about the MC20 GT and the brand's return to motorsports, Maserati CEO Davide Grasso said that the company and its new project is driven by its passion, both on the road and on the track. “We have a long history of world excellence in motorsport and we are extremely proud to race with the extraordinary MC20. Racing has always been Maserati's natural habitat and now, both in the Fanatec GT2 European Series Championship and in the Formula E Championship, this brand is making a new start from its roots to build the future," he further stated.