NEOM, touted as ‘world’s most liveable city', to shun cars for flying taxis

Saudi Arabia is building the city of the future and there is no place for cars in it.
By : HT Auto Desk
| Updated on: 27 Jul 2022, 10:58 AM
A handout picture provided by NEOM shows the design plan for the 500-metre tall parallel structures, known collectively as The Line, in the heart of the Red Sea megacity NEOM. (AFP)
View all Images

1/6
Saudi Arabia is working on a megacity of the future called NEOM that would eventually home around 100 million people. The city will have both Saudi residents as well as foreigners. (AFP)

2/6
NEOM would be a biotech and digital hub spread over 34 square kilometers with its own controlled weather and natural ventilation system. The entire energy requirement would come from renewable sources like solar and wind. (AFP)

3/6
While NEOM will also boast of some very impressive architectural structures, Saudi Crown Prince Mohammed bin Salman has emphasized that it would fulfill the car-free utopia and instead have alternate transport options. (AFP)

4/6
NEOM would eventually have air taxis and a central rail line to connect one part of the city to another. Those in the know say that every residence would be only a short distance away from lifestyle requirement centers. (AFP)

6/6
While skeptics and critics slam NEOM as an exercise in futility and in vanity, Saudi authorities are confident that it could be the start of what urban centers look like in the times to come. (AFP)

Saudi Crown Prince Mohammed bin Salman has revealed more details around an upcoming megacity called NEOM being developed in his country - and under his careful watch - with plans of making it a car-free region which would have air taxis zooming across its skies. bin Salman has gone to the extent of saying that NEOM would be the 'planet's most liveable city.'

Neom is being touted as the city of the future and would be spread over a large area of desert and mountainous terrain. News agency AFP reports that NEOM would be a biotech and digital hub spread over 34 square kilometers. During a presentation earlier this week, bin Salman highlighted how the city would not have any conventional vehicles and that air taxis would be one of the key transport options for those who would eventually call NEOM home. 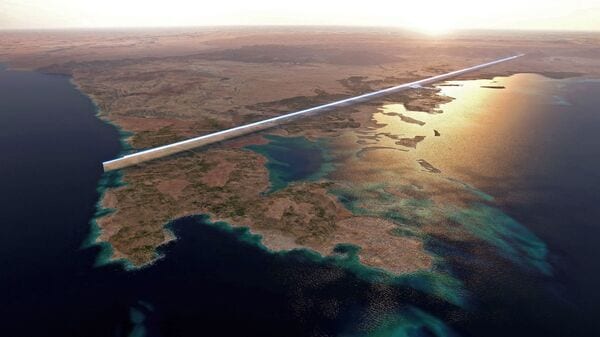 NEOM is being developed as a city of the future with a near-equal mix of Saudi as well as foreign residents. (AFP)

It is believed that because the eventual population target is of 100 million by 2040 - this is more than the current population of cities like London and New York, new-age transport options would be required. It is also rather ironical that while Saudi Arabia's riches come from its oil reserves, NEOM would mostly make use of renewable sources of energy to power itself. In fact, a promotional video claims that the entire city would be powered entirely by renewable energy through the year and because it would be under a bio dome, there would be a temperate micro-climate with natural ventilation. So while solar and wind energy would be the primary sources, reports suggest NEOM would also have the world's largest green hydrogen plant.

Saudi Arabia is pouring big bucks to turn NEOM from a fantasy into reality. It is reported that the first phase of the project will take until 2030 to complete and cost around $319 billion. But while the humungous cost is a challenge in itself, skeptics are also doubting whether most of the tall claims. Several engineers, architects, town planners and financial experts are warning against what they say is an exercise in idealism and utopia.