Vitara Brezza from Maruti Suzuki gets new styling elements on the outside, upgraded features within and now boasts of a 1.5-litre K Series petrol engine.
By : Shubhodeep Chakravarty
| Updated on: 11 Feb 2020, 10:01 AM 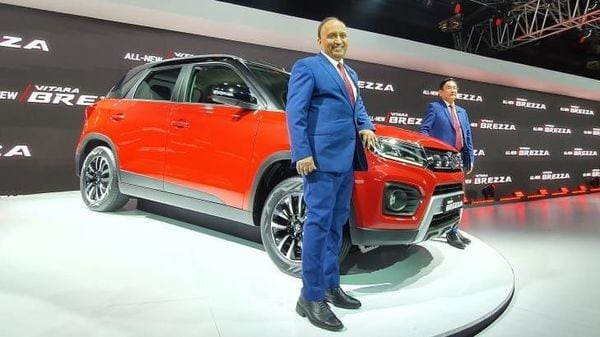 GREATER NOIDA : Four years after setting the compact SUV segment in India on fire, Maruti Suzuki on Thursday launched the much-awaited petrol version of Vitara Brezza at Auto Expo 2020. The compact SUV now also sports several design changes on the outside to distinguish it from the outgoing model.

First showcased at Auto Expo 2016, the Vitara Brezza has been a massive success story for Maruti Suzuki but recent times have seen rivals upping their respective game to deal a dent to the car. Now, the country's largest car maker is trying to win back lost ground by offering a BS 6-compliant petrol engine that has been a long-standing demand.

In its latest edition, Vitara Brezza gets a 1.5-litre Smart Hybrid Vehicle (SHVS) petrol engine which has been borrowed from the Ciaz sedan. It is mated to a five-speed manual and a four-speed AGS transmission. The compact SUV has peak power of 103 bhp and peak torque of 138 Nm. The new Brezza claims to have better mileage, more power and will be offered with BS 6-compliant engines which means lesser emissions.

The exterior design of Brezza has been re-crafted to give it premium look with emphasis on sporty character. Front bull-bar design adds to the design and skid plates give it a distinct look. It gets an integrated head lamp. The diamond-cut alloys also add to the fresh appeal of the car.

Inside, the steering is leather-wrapped and the SmartPlay Studio from Maruti makes its Brezza debut.

Speaking at the launch event, Kenichi Ayukawa, MD and CEO at Maruti Suzuki, said he is sure the new Brezza will live up to the legacy of its predecessor. "Our buyers are evolving, so we should also evolve. It gives me immense pleasure to introduce this new product," he said. "The new Brezza is bolder and more premium, and carries forward the rich legacy of its predecessor."