The latest Brezza and Venue are looking to not just brush aside younger rivals but once again go at each other as the most-desired option in the sub-compact SUV. Which one should you choose?
By : Shubhodeep Chakravarty
| Updated on: 05 Aug 2022, 19:08 PM
Marruti Suzuki Brezza (left) and Hyundai Venue are both much younger to look at now than these have ever been.
View all Images

1/5
Maruti Suzuki Vitara Brezza and the Hyundai Venue have been two leading competitors of each other in the sub-compact SUV segment of the Indian market. These two sub-compact models also rival the likes of Tata Nexon, Mahindra XUV300, Kia Sonet along with Nissan Magnite and Renault Kiger.

2/5
Maruti Suzuki Vitara sports a single 1.5-litre K15 petrol engine which has been paired with Smart Hybrid Technology. Brezza offers around 100 hp output and peak torque of 136.8 Nm. It offers a six-speed automatic transmission unit and a five-speed manual stick. On the other hand, Hyundai Venue comes with three powertrain options. These are a 1.2-litre Kappa MPi petrol engine, a 1.0-litre turbocharged Kappa GDi petrol motor and a 1.5-litre U2 CRDi diesel unit. The 1.2-litre petrol powertrain produces power of 81 hp and 113.8 Nm while the 1.0-litre turbocharged petrol engine generates 118 PS with 172 Nm torque. The 1.5-litre diesel engine generates 98 hp and torque of 240 Nm.

4/5
Maruti Suzuki Brezza starts at ₹8 lakh (ex showroom) with pricing going up to ₹13.96 lakh (ex-showroom for the ZXi Plus variant with dual-tone hues.

5/5
Hyundai Venue starts at ₹7.53 lakh for the E variant with the 1.2-litre engine mated to the manual gearbox. The iMT or semi-automatic gearbox is mated to the turbo engine only and starts at ₹10 lakh. The DCT unit is also mated only to the turbo engine and starts at ₹10.97 lakh. The range-topping SX(O) with turbo petrol engine, DCT and dual-tone hues is at ₹12.72 lakh. The diesel variant is priced between ₹10 lakh and ₹12.47 lakh. All prices are ex-showroom.

Maruti Suzuki Vitara Brezza and Hyundai Venue have been the two leading players in the sub-compact SUV segment in the Indian car market for years, and counting. Despite the entry of newer - and worthy - models like the Tata Nexon, Mahindra XUV300, Kia Sonet as well as entry-price level models like Nissan Magnite and Renault Kiger, Vitara Brezza and Venue have continued to size each other up as the main two rivaling force. Little wonder then that the updated versions of both models were unveiled and subsequently launched quite close to each other, earlier this year.

Vitara Brezza, now rebadged as Brezza, was the first to kickstart the entire craze for sub-compact SUVs when it was showcased at the Auto Expo in 2016. Offered then with only diesel motor, the car adopted and embraced Maruti's petrol-only strategy in 2019. It was given a minor facelift too. But the pressure was definitely on in terms of a slightly dated design language as well as a woefully inadequate feature list. The Koreans were firing on all cylinders. Both Brezza (left) and Venue have a strong stance but the Maruti model stands taller and microscopically wider.

Venue was first launched in 2019 and Hyundai hoped it would be able to replicate the success of elder sibling Creta. And to a large extent, it has. Loaded with features, sporty looks and with both petrol as well as diesel engine options, the SUV even received a semi-automatic option - Hyundai calls it iMT or Intelligent Manual Transmission - subsequently. But while Brezza still has the upper hand in terms of sales' numbers, Venue is a worthy rival.

But what do both Brezza and Venue bring to the table in 2022? After all, the updates are quite significant in both models and potential customers are sure to weigh the pros and cons of both before homing in on one.

Here's a detailed comparison between the 2022 Brezza and 2022 Venue:

We received a unit each of the latest Brezza and Venue for a comparison. The top-end Brezza is the ZXi Plus variant with AT and and because the Maruti model only has petrol engine on offer, the most relevant Hyundai counterpart was the top-end 1.0-litre Turbo petrol engine-powered with DCT.

Our comparison is based on four broad pillars on which, we feel, buyers determine their eventual choices - Looks, features and space, drivability and pricing. Brezza (left) and Venue repeatedly figure in the list of best-selling vehicles in the country.

Both Brezza and Venue now look radically different from their respective preceding models. While both vehicles retain their individual dimensions, both now also look very modern and ready to take on newer rivals. 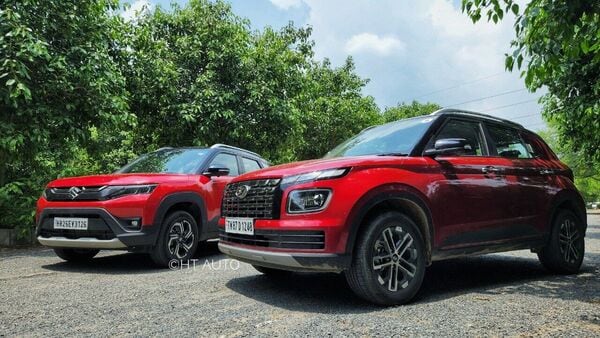 Brezza, complete with its flowing DRLs surrounding the twin-pod LED headlight units, has a fresh face. The black band with chrome strip instead of the chunky chrome bar adds ample doses of sophistication while the grille in gunmetal finish adds a bit of muscle. 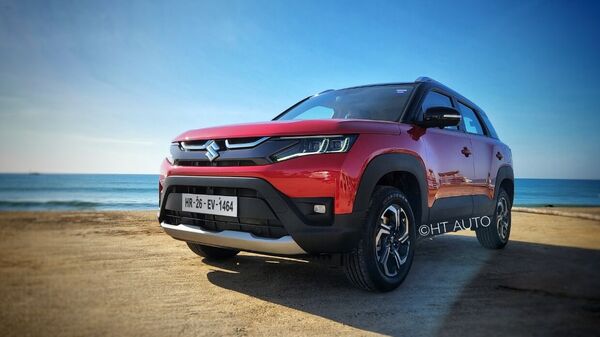 Maruti Suzuki Brezza has the same dimensions as the outgoing Vitara Brezza.

Not much has changed on the side except for reworked design on the 16-inch alloys and minor addition of character line on the body.

From the rear, the sophistication continues with the chrome badge with ‘Brezza’ lettering' on the boot making way for a cleaner language. The sleek and extended LED tail light design is perfectly suited to the overall design language at play here. A closer look at the rear profile of Maruti Suzuki Brezza.

Venue too looks quite sporty, almost flashy, courtesy the mammoth grille with block patterns in dark chrome. There may be no fog lamps any longer and the split head light units may have been carried forward from the previous model but LEDs now come in to replace the halogen projector lights. The front bumper has been reworked. 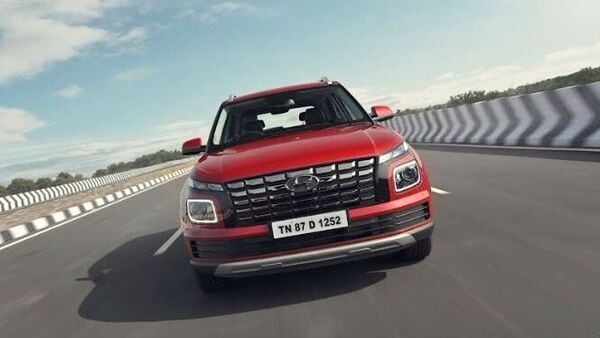 A closer look at the face of the updated Hyundai Venue.

From the side, and much like on the Brezza, not much has changed apart from the alloy design on the 16-inch wheels.

And much like Brezza, the biggest change on the Venue comes at the rear with an entirely new LED tail light design which is connected by a stretched LED light bar across the boot. The rear bumper has also received an update. 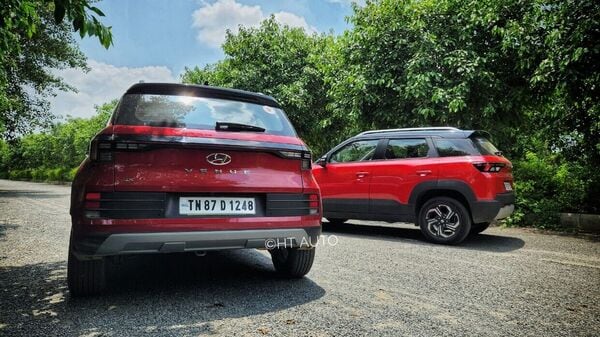 A closer look at the rear profile of Hyundai Venue.

Verdict: Looks can be extremely subjective but for us, the Brezza is an exercise in sophistication and stands significantly apart from the previous-gen model. Venue looks smarter and younger too but just seems to be trying a bit extra to gain attention. This round goes to Brezza but only by a microscopic margin and is open to individual interpretation. 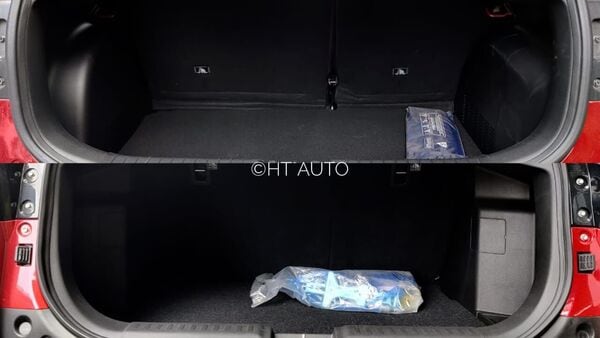 Venue (top) boot is slightly bigger and noticeably deeper than the boot space inside Brezza.

Feature list is where Venue has always had a commanding lead over the Vitara Brezza. Against the Brezza? Things get a whole lot closer. 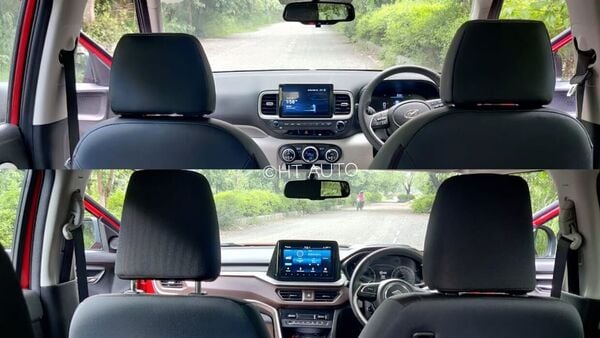 A look at the dashboard layout inside Venue (top) and Brezza.

The latest Brezza is the first model from Maruti Suzuki to get a sunroof. But if that's not quite impressive, it also gets segment-first features like a Head-up Display (HUD), surround-view camera and a larger nine-inch main infotainment screen with voice-recognition system. 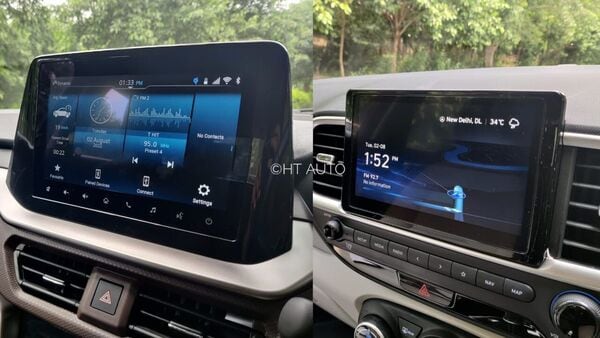 The infotainment screen inside the Brezza (left) is larger than the one inside Venue.

Venue may not have HUD or surround-view camera but it hits back with ventilated front seats, air-purification system, electronically-adjustable driver seat and an all-digital driver display. The main screen though is smaller at eight inches. Brezza (left) may have a semi-digital driver display but the addition of an HUD evens things out when put up against the all-digital driver screen in the Venue.

Both Brezza and Venue offer new-age feature highlights like support for Android Auto and Apple CarPlay, ambient lighting, wireless phone charging and premium audio system. In terms of specific strengths, Venue's cabin feels more upmarket compared to that of Brezza even though the Maruti's new layered dashboard is cleaner than before. In terms of space and drive height, Brezza holds the slight edge for both passengers as well as the person behind the wheel who is seated higher up.

Verdict: This again is a very close contest but we would once again give the edge to the Brezza because of how far it has come from its previous-gen edition in terms of updates to its feature list. Space and seat comfort is also slightly more inside the Brezza. The Venue sure is loaded but the updates aren't exactly as radical.

The Brezza is powered by the same 1.5-litre petrol engine which now offers 103 hp and 137 Nm of torque. This engine is mated to either a manual unit or to the new six-speed AT that figures in this comparison. Brezza may not have a diesel engine on offer like the Venue does but it claims to hit back with mild hybrid technology that takes the stated mileage to nearly 20 kmpl on the AT. Brezza is likely to offer slightly better mileage thanks to its mild-hybrid technology but for someone considering a diesel engine, it is the Venue that becomes an obvious choice between the two.

Venue, on the other hand, has three engine choices - the 1.0-litre Turbo petrol which figures in this comparison, a 1.2-litre petrol and a 1.5-litre punchy diesel unit. We will only take the 1.0-litre turbo motor into account here and it produces 116 hp and offers 172 Nm of torque. The stated mileage on this engine with the DCT unit is at 18.1 kmpl.

Verdict: Venue has a clear advantage in this regard because while its stated mileage may be less than that of the Brezza with mild hybrid, it is definitely more fun to drive. The DCT works fluently and the response to throttle inputs is quite instantaneous.

Verdict: Both Brezza and Venue are now significantly more expensive than the respective previous-gen models. This is due to a number of factors which range from rising input costs and supply-chain issues, among others. But in a variant to variant comparison, Venue mostly always emerges as a slightly more affordable option of the two.

The latest Brezza is a big update over its preceding model and definitely looks far more modern than ever before. If buying a new car for the looks, the Maruti Suzuki SUV appears to have an edge without the buyer having to compromise on features like before. The mild-hybrid technology is a boon too in times of uncertain fuel prices. And that's great. 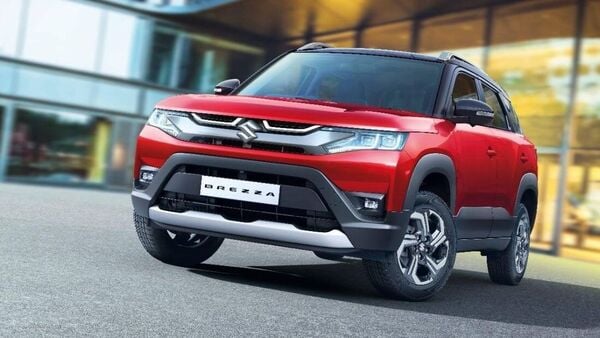 The latest Maruti Suzuki Brezza gets signifiacnt changes to its exterior styling all around.

Venue remains a feature-loaded option and the design updates work fairly well in its favour. Quite sporty to drive - whether in its manual or DCT avatar. But because it is priced better than the Brezza, it could prove to be a more viable option for the budget-conscious buyer. 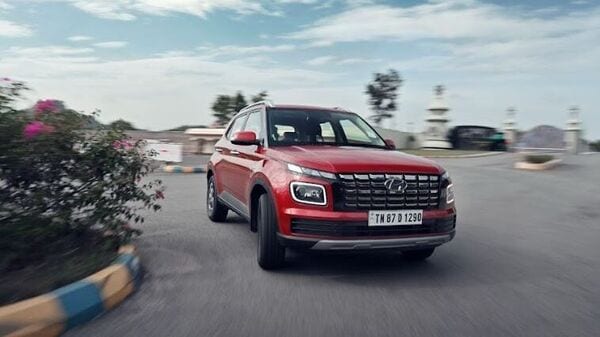 The Venue isn't very eager when being thrown into turns and there is some degree of body roll. But on the flipside, the suspension on the vehicle seems to have been stiffened a tad bit more to better absorb road shock.

As such, if budget isn't an issue, Brezza deserves a look. But as an all-round option that is comparatively more affordable, Venue emerges as a stronger choice.