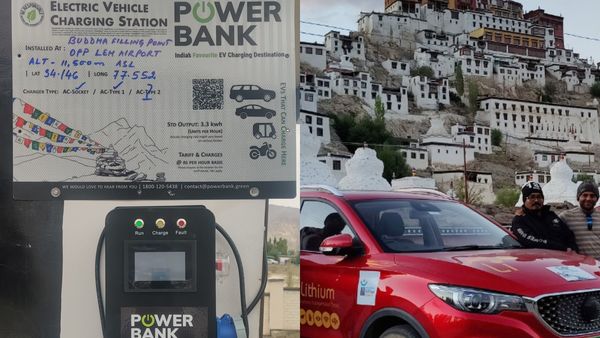 The EV charging points have been installed at key and convenient locations along the scenic route of Manali to Leh.

Are you planning to drive from Manali to Leh in an electric vehicle? Worry not, you're covered. PowerBank, the flagship brand under Shuchi Anant Virya, has announced the setting up of 18 EV charging stations along the Manali-Leh route in Ladakh region. Five of those charging points have been installed at the world's highest motorable passes including Khardung La, Chang La and Taglang La passes.

Fifteen of the eighteen charging stations have been installed at a height of 10,000-15,000 feet above sea level while all the charging points installed along the 1800-km Manali-Leh route was installed in just 10 days. The locations along the route include Manali, Leh, Kargil, Nubra, Turtuk, Pangong and Siachen Base Camp. The installed chargers are a mix of Type-I and Type- II AC chargers catering to electric two, three and four wheelers.

These EV charging points have been installed at key and convenient locations along the scenic route such as Hermis Monastery, Grand Dragon hotel in Leh, , Hotel Kargil at Kargil, and Nubra Organic Retreat and Cafe-wala Chai at Nubra. At these facilities, travellers can leave their electric vehicles charging overnight or even grab a bite or rest while the vehicle charges.

The Shuchi Anant Virya team also covered the distance from Manali to Leh in electric vehicles, charging these vehicles at the installed charging stations. “We set-out on this journey with the aim of protecting the most fragile ecosystems in India, starting with Himachal and Lakdak," said Sanjay Krishnan, Founder, Lithium Urban Technologies. Shuchi Anant Virya is a joint venture between Fourth Partner Energy and Lithium Urban Technologies.

Through this initiative, PowerBank aims to convert at least 50% of the vehicular traffic in the region to EVs in the next 36-48 months and reduce the carbon emissions in the popular tourist destination. “Through PowerBank, we are looking to cover the length and breadth of the country with accessible, affordable EV charging points that are easy to use," said Vivek Subramanian, Co-Founder and Executive Director, Fourth Partner Energy.