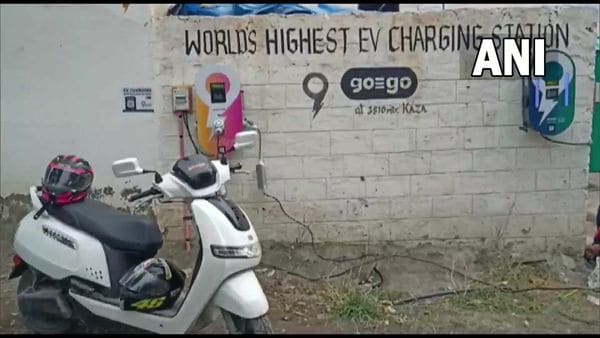 It may not be too long before anyone begins to dare take their electric vehicles on a Ladakh trip. To minimise infrastructure worries, the Ladakh administration has opened an EV charging station in Kaza, situated in the picturesque Lahaul and Spiti district of the Union Territory.

The EV charging station was opened to public on Thursday, with at least two electric scooters being the firsts to use the facility. The two scooters, which went all the way from Manali, the capital of Himachal Pradesh located more than 300 kms away, rode to promote clean environment before stopping to recharge.

Mahendra Pratap Singh, Sub-Divisional Magistrate (SDM) of Kaza, was quoted by news agency ANI saying, "This is the world's highest electric vehicle charging station at 500 ft in Kaza. It is the first station here. If the station gets a good response, more stations would be set up. It will also help to check vehicular pollution."

"Today two women have come from Manali to Kaza on the electric vehicle to promote a sustainable environment. The weather nowadays is changing abruptly due to an increase in air pollution and the emission of gases from vehicles is one of the main causes of this pollution," he added.

The EV charging station has all its products, including the chargers, made in India. One of the women who rode her electric scooter to the Kaza EV charging point, was quoted by ANI saying, "All the products are made in India here and we travelled from Manali to Kaza to promote sustainable energy. Also, there is a myth that we can not cover long-distance journeys on electric vehicles. So, we both wanted to prove it wrong by riding these electric scooters today from Manali. We had a very comfortable journey."

Ladakh is not known to be populated with too many refuelling stations for the conventional ICE vehicles. Every year, thousands of bikers and car owners take the Manali-Leh or Srinagar-Leh route for adventure trips. Therefore, very few have made any attempts to cover the distance on an electric vehicle so far.

On the Manali-Leh route via Lahaul and Spiti, commuters have very few options of refuelling stations. One of them is located in Tandi, Himachal Pradesh, and another in Karu, about 345 kms further towards Leh. The distance between Leh and Manali is around 430 kms.

If Ladakh administration comes up with more EV charging stations along the popular routes, there could be an increase of electric vehicles, both two- and four-wheelers, in future.