Mahindra and Mahindra had launched its new flagship SUV XUV700 on August 15 last year. Despite surging demands, timely delivery of the SUV remains a challenge for the carmaker almost a year later.
By : HT Auto Desk
| Updated on: 23 Jul 2022, 13:52 PM 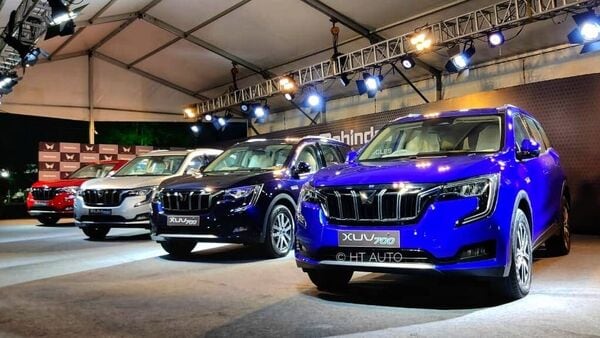 Mahindra and Mahindra's flagship XUV700 SUV has achieved a major milestone of clocking 1.5 lakh bookings since its launch in August 2021.

Mahindra XUV700 SUV has achieved a major milestone since its launch back in August last year. Mahindra and Mahindra has announced that the XUV700 has clocked 1.5 lakh bookings so far in the first 11 months of its launch. The achievement comes just days before Mahindra XUV700 will turn a year in the Indian market. However, long waiting period to get one delivered remains one of the biggest challenges for the carmaker to make XUV700 succeed over other SUVs.

Mahindra XUV700 stormed into the Indian market with massive bookings done in its initial days. It took less than an hour for the first 25,000 units of the SUV to get booked. However, the deliveries of the XUV700 were delayed due to the ongoing supply crisis and chip shortages.

Mahindra XUV700 currently has the longest waiting period among all other SUVs sold in India. Depending on variants, the waiting period for XUV700 may stretch up to nearly two years in some cases. By June this year, Mahindra had sold around 42,000 units of XUV700. This effectively means around one lakh customers are still waiting for their XUV700 SUVs delivered.

However, Mahindra and Mahindra said that the carmaker is trying to address the issue, admitting it has been a challenge to meet massive demands. Veejay Nakra, President of the automotive division at Mahindra and Mahindra, recently told HT Auto that it gets embarrassing after a point to have such long waiting period for a flagship model. “Any strong brand will always have a waiting but it is always a fine balance - how much is the waiting and how much is the ability to ramp up and deliver and reduce the waiting," he said.

The new XUV700 is seen as the successor to the XUV500. It comes with a new body design, a sea of new features, safety equipment and much more. The XUV700 is the first SUV in its category to offer ADAS features. It rivals the likes of Tata Safari, MG Hector Plus and even the recently launched Kia Carens.