Scorpio-N vs XUV700: Which Mahindra SUV suits you?

Mahindra Scorpio-N and XUV700 are expected to lead the carmaker's SUV charge in India. However, the choice could be a little difficult given the long waiting period for the XUV700.
By : HT Auto Desk
| Updated on: 08 Jul 2022, 12:36 PM 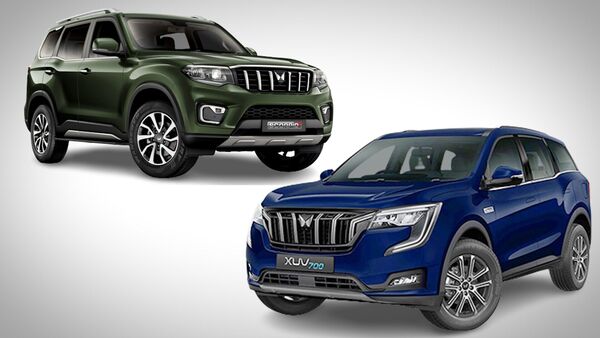 Mahindra Scorpio-N and XUV700 share a lot of similarities in terms of features and specs. Both are priced in nearly similar range.

After the Thar and XUV700, Mahindra has introduced the new Scorpio-N amid an aggressive SUV strategy aiming to take the lead in the segment. While Thar has a niche segment of buyers, the XUV700 and Scorpio-N promises to be more popular offerings which also offer performance of a 4X4 vehicle. XUV700 is currently Mahindra’s second best-selling model after the Bolero SUV. Scorpio-N, which was launched recently at a starting price of 11.99 lakh, could also play a significant role to boost Mahindra’s sales as it aims to be the number four carmaker in India after Maruti Suzuki, Hyundai Motor and Tata Motors.

While the XUV700 is the flagship model from Mahindra loaded with features and technology, the new Scorpio-N, which will be sold along with the old generation model Scorpio Classic, offers descent number of features to attract SUV lovers. The XUV700 has a starting price of ₹13.18 lakh (ex-showroom) and is just about ₹one lakh more expensive than the Scorpio-N base variant. The small difference in price could make for a difficult choice for buyers to decide whether to go for the new Scorpio-N or the XUV700. Here is a quick comparison between the two models to make it easier.

Mahindra has not yet revealed the prices of the Scorpio-N automatic variants to be offered in petrol and diesel.

Scorpio-N and XUV700 SUVs are based on two different platforms. While the monocoque chassis of the XUV700 offers a cushy ride, the ladder-frame chassis of the Scorpio-N is meant for performance on rugged roads. Not only that, Mahindra Scorpio-N has also grown in size compared to its previous generation model, and is larger in some aspects compared to the XUV700. The Scorpio-N SUV stands 4,662 mm long, 1,917 mm wide and 1,857 mm tall. In comparison, the XUV700 is smaller by 27 mm in width and 102 mm shorter than the Scorpio-N. However, in terms of looks, the XUV700 may attract more buyers because of premium features like flush door handles. Also the XUV700 offers vertical boot door unlike the one on Scorpio-N which opens sideways.

Features is one department where XUV700 scores over the Scorpio-N. The XUV700 is more premium with features loaded. It gets a larger 10.25-inch touchscreen infotainment system with Adrenox, Alexa built-in features. The XUV700 also comes with a digital driver display which is missing inside the Scorpio-N. However, the biggest difference is the ADAS features on offer for the higher trims of the XUV700.