Mahindra XUV700 had the dubious record of one of the longest waiting period until recently. Waiting period for the Scorpio-N, which was launched three months ago, could extend further.
By : HT Auto Desk
| Updated on: 19 Sep 2022, 09:50 AM

Mahindra Scorpio-N SUV was launched in India on June 27 at a starting price of ₹11.99 lakh (introductory). The price for top-end Z8 trim goes up to 19.49 lakh (ex-showroom).

Waiting period for Mahindra and Mahindra's flagship SUVs has stretched beyond two years. In what seems to be the longest among all SUVs currently available in India, Mahindra Scorpio-N sits right on top with a waiting period of more than 100 weeks, which is around 25 months or over two years. Customers who had booked the Scorpio-N have started to share their respective booking details which have revealed the demand as well as delivery crunch for the new avatar of the popular SUV.

HT Auto received one such booking detail which shows that the delivery timeline is between September and October of 2024. The booking was done last month for the Z4 G petrol manual variant. The current status shows that the particular unit is still ‘under planning’ and that it is yet to go into production. Once produced, the unit will be despatched to the dealers and handed over to the respective customer. 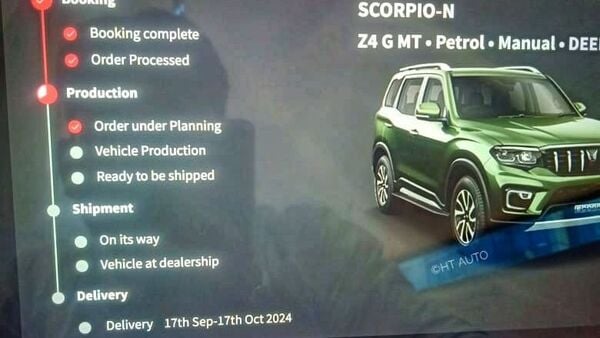 According to reports, the Z6 and Z8 trims of the Scorpio-N have the longest waiting period among all the variants of the SUV. The quickest you can bring home a Scorpio-N currently is to go for the top-spec Z8L trim which has a waiting period between 85 to 90 weeks.

Along with the XUV700, Scorpio-N forms the new flagship lineup from the carmaker which aims to dominate the SUV segment in India. However, long waiting period for both SUVs has been a spot of bother for Mahindra, as was admitted by the top management. Rajesh Jejurikar, Executive Director at Mahindra and Mahindra, had recently told HT Auto, “It is surely not ideal to have customers wait for long for their Mahindra models but at present, we are trying to up production capacities. Production for XUV700 is near max and is being upped for Scorpio-N."

Mahindra Scorpio-N SUV was launched in India on June 27 at a starting price of ₹11.99 lakh (introductory). The price for top-end Z8 trim goes up to 19.49 lakh (ex-showroom).

This upcoming e-scooter to get portable batteries, modular charging and more