Global chip shortage crisis has hit the Indian auto industry as well. Tata Motors too feels the pinch as it said that waiting period even on its EVs like Nexon and Tigor has gone up.
By : HT Auto Desk
| Updated on: 02 Nov 2021, 09:19 AM 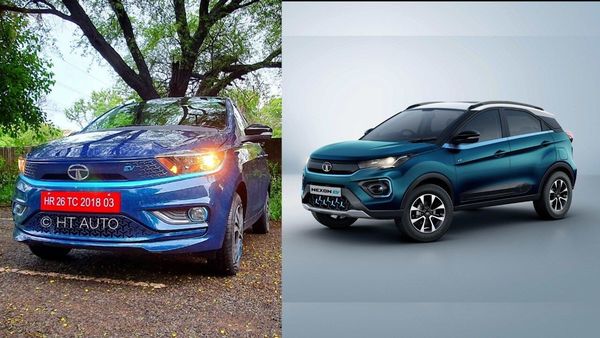 Tigor (left) and Nexon EVs are the two battery-powered options from Tata Motors.

As demands keep growing for Tata's electric cars like Nexon and Tigor, the carmaker is struggling to keep up with it amid global chip shortage crisis. Tata Motors has said that the waiting period on Nexon EV and Tigor EV could extend up to six months due to the ongoing crisis.

PB Balaji, Chief Financial Officer at Tata Motors, said, "We are doing our level best to mitigate it (the waiting time)... but we are dealing with a global crisis on semiconductors and there is only so much we are able to do."

Tata Nexon EV continues to be the best-selling electric car in India. Though rivals like Mahindra, MG Motor or Hyundai do offer EVs in the country, none have been able to penetrate the market as Tata's EVs have done so far.

Tata Motors recently launched India's most affordable electric vehicle Tigor EV at a price of ₹ ₹11.99 lakh, going up to ₹13.14 lakh (ex showroom). The new Tigor EV, which has received some updates over its predecessor, now has a better performing battery pack and fresh styling and features. The Tigor EV is the first electric sedan available for mass Indian buyers.

Tata Motors is the largest carmaker when it comes to selling electric cars in India. The carmaker currently has a share of more than 70 per cent in the EV segment.

Tata has also committed to launch ten more electric cars in India over the next five years. The carmaker has also raised ₹7,500 crore to boost its EV business. Out of these ten upcoming electric cars, Tata will launch at least seven cars in the next four years.