The new Lexus ES luxury sedan, which was earlier launched for global markets, will rival Mercedes E-Class, the ES executive sedan. It will have a new-look grille, headlights, wheels, state-of-the-art technologies that are far more advanced than its predecessor.
By : HT Auto Desk
| Written By : Sabyasachi Dasgupta
| Updated on: 06 Oct 2021, 06:04 PM 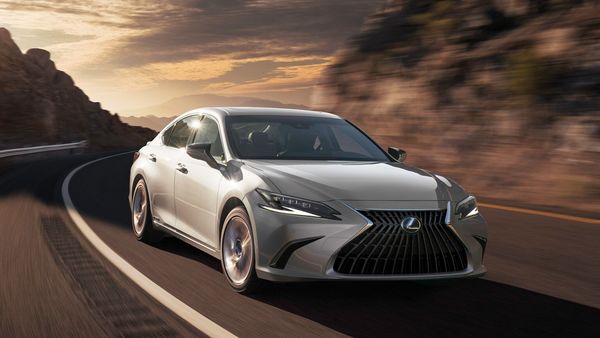 Lexus India is all set to launch the facelift version of its flagship luxury sedan ES tomorrow. Ahead of the launch, Lexus has teased the new ES on its social media channels which confirms it will be offered with the hybrid technology.

The existing models of the Lexus ES costs from ₹56.62 lakh (ex-showroom). Expect the facelift model to command a bit more premium due to the changes the model has undergone in its latest avatar. It will take on rivals like the Mercedes E-Class, the ES executive sedan.

The new Lexus ES sedan was earlier launched for global markets at the Shanghai Auto Show. It comes with a new-look grille, headlights, wheels, state-of-the-art technologies that are far more advanced than its predecessor.

The newly designed wheels include a standard 17-inch with thicker spokes, stacked in layers in the shape of the letter V for a sporty impression. There may be option to upgrade the wheel size to up to 18 inches.

The interior of the new Lexus ES comes with an 8.0-inch infotainment system as standard, and a 12.3-inch driver's display. It is also likely to get other features like ventilated front seats and reclining rear seats for comfort, smartphone connectivity, ambient lighting and a Mark Levinson Premium Surround Sound system besides others.

The facelift version of the Lexus ES is likely to be powered by the same engine with hybrid technology that is used in the existing ES300h model in India. The 2.5-litre hybrid engine is capable of churning out 176 bhp of maximum power and 221 Nm of peak torque.

The new Lexus ES is likely to be offered with a new suite of Lexus Safety System + 2.5 driver assistance systems. It includes a collision avoidance system with an improved camera lens and millimetre-wave radar for increased response range. It may also get features like a cornering speed reduction function that can automatically slow the vehicle down in certain bends.