The new Defender from Land Rover comes unscathed in almost every crash test performed on it.Defender 110 and 90 seek to be known as much for safety as it has always been known for its all-terrain abilities.
By : HT Auto Desk
| Updated on: 09 Dec 2020, 15:35 PM 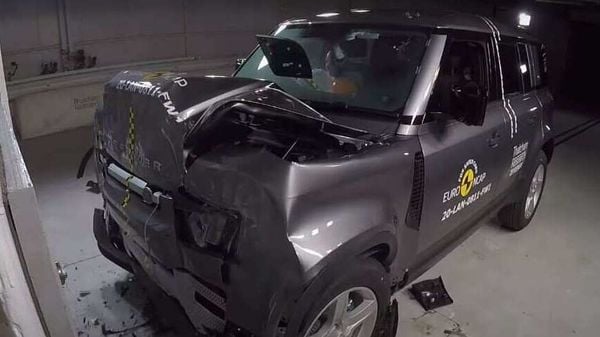 Land Rover Defender 110 has managed to gain full marks - and five stars - in the latest round of Euro NCAP crash tests. Built for the outdoors, the latest Defender has been launched in several markets, including India, in recent months and is now backing its safety features almost as much as its terrain-conquering highlights.

First showcased at Frankfurt Motor Show in 2019, the latest Defender is offered in 110 as well as 90 and it was the former that was put to the test. It was found that the SUV's passenger compartment remained stable in the offset frontal test and that its high mass and front structure makes it reliable for passengers in case of frontal collision scenarios.

In the full-width, rigid wall test, protection was good or adequate for all body critical body regions, except for the chest of the rear passenger, protection of which was rated as marginal, based on findings on the chest compression.

In the two side tests - one involving a vehicle and the other and more brutal side pole test, the Defender 110 managed to provide 'good overall protection, the test assessment report read. There is also decent levels of protection against whiplash injury which was backed by tests on front seats and head restraints.

The same report also highlighted that the SUV's multi-collision braking system prevents secondary impacts while its e-Call system automatically sends a message to emergency services in the case of accidents - a feature becoming increasingly common in rival cars as well.