Kia Sonet has been launched at introductory prices.Sonet is third product to join the Kia's India portfolio after the popular Seltos and Carnival luxury MPV.Sonet has been positioned in the hotly contested sub-4 metre SUV space alongside Maruti Brezza, Tata Nexon, Hyundai Venue and Mahindra XUV300.
By : HT Auto Desk
| Updated on: 18 Sep 2020, 04:46 PM 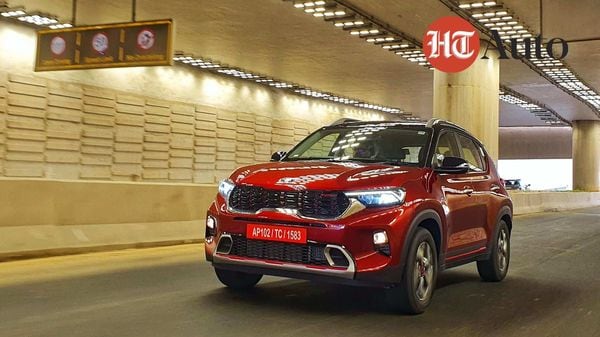 Kia Sonet has been launched in a dual trim concept as the Seltos.

Kia on Friday launched the much awaited Sonet subcompact SUV in the Indian market starting at an introductory price of ₹6.71 lakh for the base HTE variant, extending up to ₹11.99 lakh for the top of the line GTX+ variant. 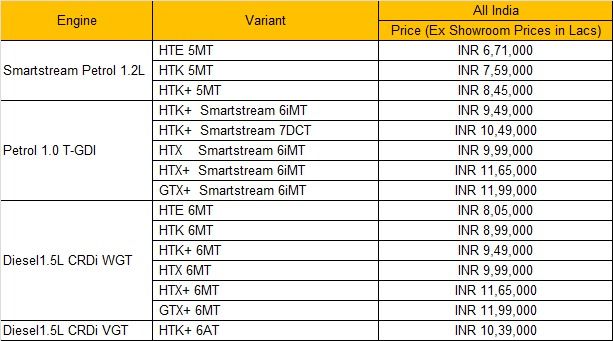 Sonet is the third product to join the Kia Motors India's portfolio after the popular Seltos and Carnival luxury MPV. It has been positioned in the hotly contested sub-4 metre SUV space alongside Maruti Suzuki, Vitara Brezza, Tata Nexon, Hyundai Venue as well as Mahindra XUV300.

The Sonet will be made available in two trims concept - Tech Line trim and GT Line trim - as previously seen with the Seltos. While the Tech Line has been reserved for the lower and mid-spec variants, the GT Line will be added on to the top-spec variant. Moreover there will be as many as seven colour options along with three dual-tone colour themes. (Read full report here)

The HT Line (Tech Line) variant list on the Sonet includes HTE, HTK, HTK+, HTX, HTX+. The number of colours available increases when going up the order. While the HTE, HTK variants are featured in colours such as Clear White, Steel Silver, Gravity Grey and Intense Red, the HTK+ and HTX variants additionally get Aurora Black, Beige Gold and Intelligence Blue options. Also, there is an option to choose Glacier White which has a slightly different hue against the Clear White. For the customers opting for the dual-tone colour theme, HTX+ and GTX+ will be the only options available. These top-of-the-line variants will be available in Glacier White Pearl/Aurora Black Pearl, Beige Gold/Aurora Black Pearl, and Intense Red/Aurora Black Pearl colour options.

As seen in the case of Seltos, the Sonet's top-spec GTX+ (GT Line) trim will feature a number of unique cosmetic additions which make it the more aggressive looking model out of the two. It will get various red accents all around such as on the grille, doors, bumpers and the brake calipers. Also, on the inside, there will be specific GT Line seats with contrast stitching on the blacked out seats to give it a sporty appeal.

Under the hood, the Sonet will feature two petrol engine options – the Smartstream 1.2-litre and the performance-oriented 1.0-litre Turbo GDi . In addition to these, there will also be a 1.5-litre diesel engine unit. The transmission options will be aplenty. There will be a 5-speed manual, a 6-speed manual, a 6-speed automatic, and a 7-speed DCT. A clucthless transmission option in the form of 6iMT will also be available. For the record, the 6iMT is also found on the Hyundai Venue.