Home Auto Reviews 2020 Kia Sonet First Drive Review: Is It Worth The Hype?

2020 Kia Sonet first drive review: Is it worth the hype?

Kia Sonet will be offered in both Techline and GT Line trims, and will offer the option of clutch-less transmission.Sonet also packs in a mile-long list of features, some claiming to be segment firsts.
By : Prashant Singh
| Updated on: 11 Sep 2020, 07:40 PM 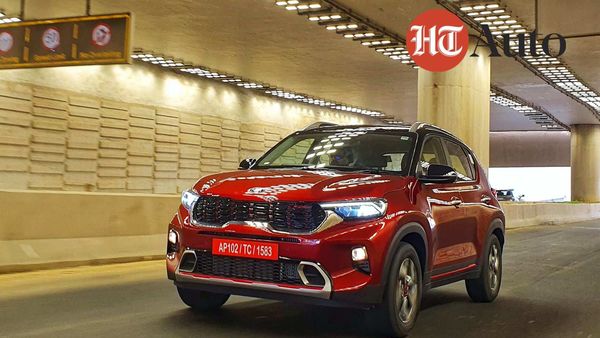 Kia Sonet will be launched in dual trim concept as the Seltos.

After the Seltos SUV and Carnival luxury MPV, Kia Motors is ready with its third offering for India in the form of Sonet sub-compact SUV which goes on sale from September 18. Kia Sonet has managed to create a whole lot of buzz and will enter the extremely lucrative sub-compact SUV segment which is also hotly contested.

The Indian car-buying audience has shown a preference towards SUVs in recent times and Kia seems to have sensed what car customers here desire as it struck the right chords with its initial offerings, especially Seltos. But the game is bigger this time and stakes even higher.

The Sonet has been placed in a segment which is booming not just in India, but globally. So much so, that sub-compact segment is eating up demands from the sedan segment. As a result, almost every car company is either already present in this space or is planning a new product for future launch. In India, Maruti's Vitara Brezza set sales standards in the sub-compact SUV space, while Hyundai Venue has now managed to carve a lead of sorts. And good for Kia, since the Sonet is a technical cousin of the Venue and underneath, both share the same DNA.

So what is Sonet all about?

Just like the Seltos, Kia is following the same dual trim concept on the Sonet as well. There will be a Techline trim and a premium GT Line. While the overall design on the outside remains the same, there will be several key elements that differentiate both the lines. For example, the Techline trims will have a slightly basic decor against the GT Line which will feature dedicated GT Line emblem, sporty red accents, all black interiors and what not. On the other hand, the Techline trims will use more silver accents with slightly sedate, easy to the eye, styling touches. The Kia Sonet boasts a very bold styling package and it certainly is a head turner on the roads.

The Sonet boasts a very bold styling package and it certainly is a head turner on the roads. Its front signature tiger nose grille is flanked by distinctive Crown Jewel LED headlamps and ‘Heartbeat’ LED DRLs which make its look unique. Over the side, the sub 4 metre SUV packs a clean look and bits like roof rails, sharp looking alloy wheels and bulbous wheel arches add to its masculine appearance. And what really stands out is its connected taillight unit with LED tail lamps and dual muffler design on the rear bumper.

How is it on the inside?

Kia has left no stones unturned to make sure that the Sonet gives a very premium and upmarket feel, especially to the buyers of this segment. The inside space, especially the dash has old-school vibes since it feels narrow and tall and you’ll find plenty of vertical elements including the air con vents. And what sort of pulls instant attention is the massive 10.25 inch touchscreen which appears to be a part of the driver’s display as it sits in the same panel. The higher trims get a 4.2 inch driver’s display with advanced driver assist screens.

The overall quality levels are appreciable too, right up there with the benchmarks including the Hyundai Venue. Specific to the GT Line on the inside is the all-black treatment, red stitching and also the D-Cut steering wheel. 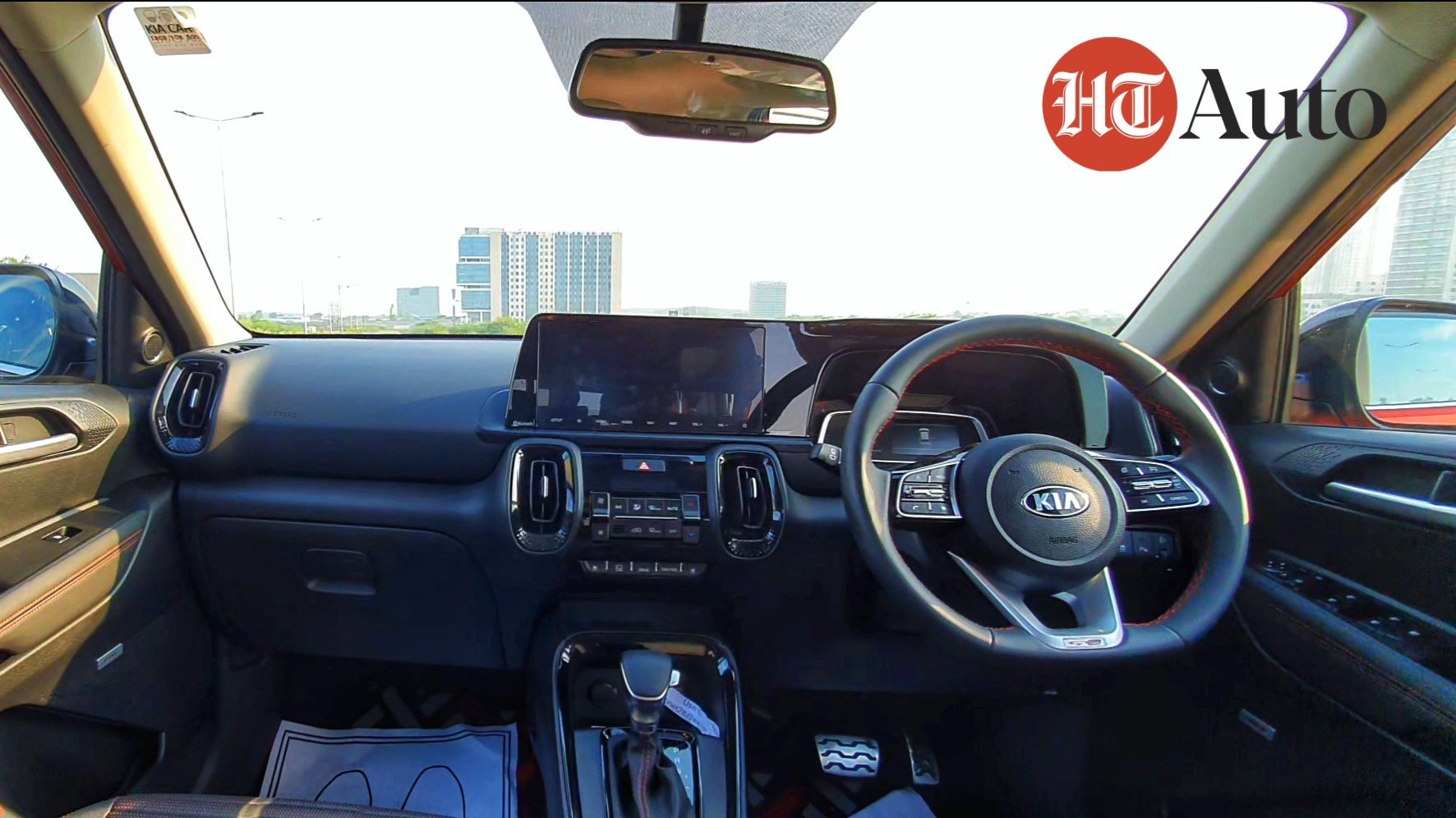 The overall cabin quality levels on Sonet are right up there with benchmarks including the Hyundai Venue.

There are a plenty of storage spaces in the front row to keep the regular everyday paraphernalia, and the higher trims also benefit from Wireless Charging slot which has been placed at a very convenient position at the center console.

Kia has also upped the ante with the addition of features including Over The Air updates and UVO connectivity. Using the latter, you can control certain features inside the Sonet remotely such as like lock/unlock, engine start and stop, AC and much more via a dedicated smart phone application. While remotely controlling some features of the car sure looks intriguing, but it isn’t exactly precise in functionality. As the commands sometimes take longer than expected to be executed and on other times, they simply fail. But that also depends upon your network connectivity and of course, the location.

Sonet also gets AI voice recognition system which is fairly handy to use. It responds to you ‘Hello Kia’ input and there’s also a dedicated button on its multi-function steering wheel for the same.

Also what’s worth a mention is that Kia claims that the Sonet has 33 segment leading featuring and while not all can be mentioned in this story, the fact that it gets Bose audio system with 7 speakers, front ventilated seats, wireless charger, sound mood lighting and more, simply makes the Sonet the first of its kind car, when features are taken into consideration. 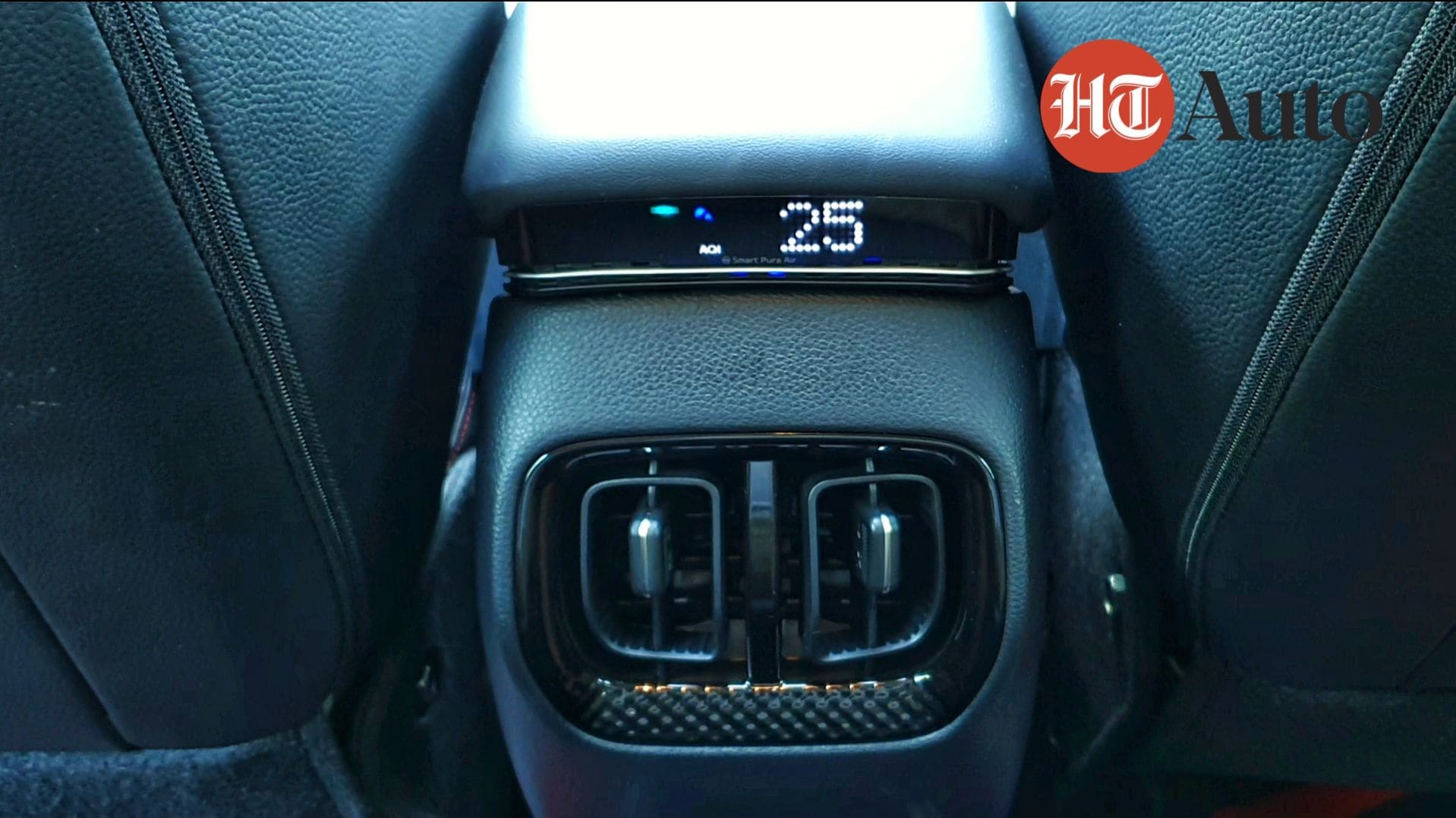 Kia Sonet gets air-con vents for the second row.

How are the rear seats?

Hop on to the rear seats and the Sonet is impressive in this department as well. There's rear seat ventilation above which sits a display which tells status of air purifier, below this panel is a space to keep your phone and there's also a USB charging socket which, of course, is a welcoming addition. The rear seat passengers also get a hand rest for extended support.

The only downside of the Sonet's second row is the overall space. While the headroom is sufficient for a 5'10, leg room simply isn't the best. Overall space in the back is more than comfortable for two, while three will definitely rub shoulders. 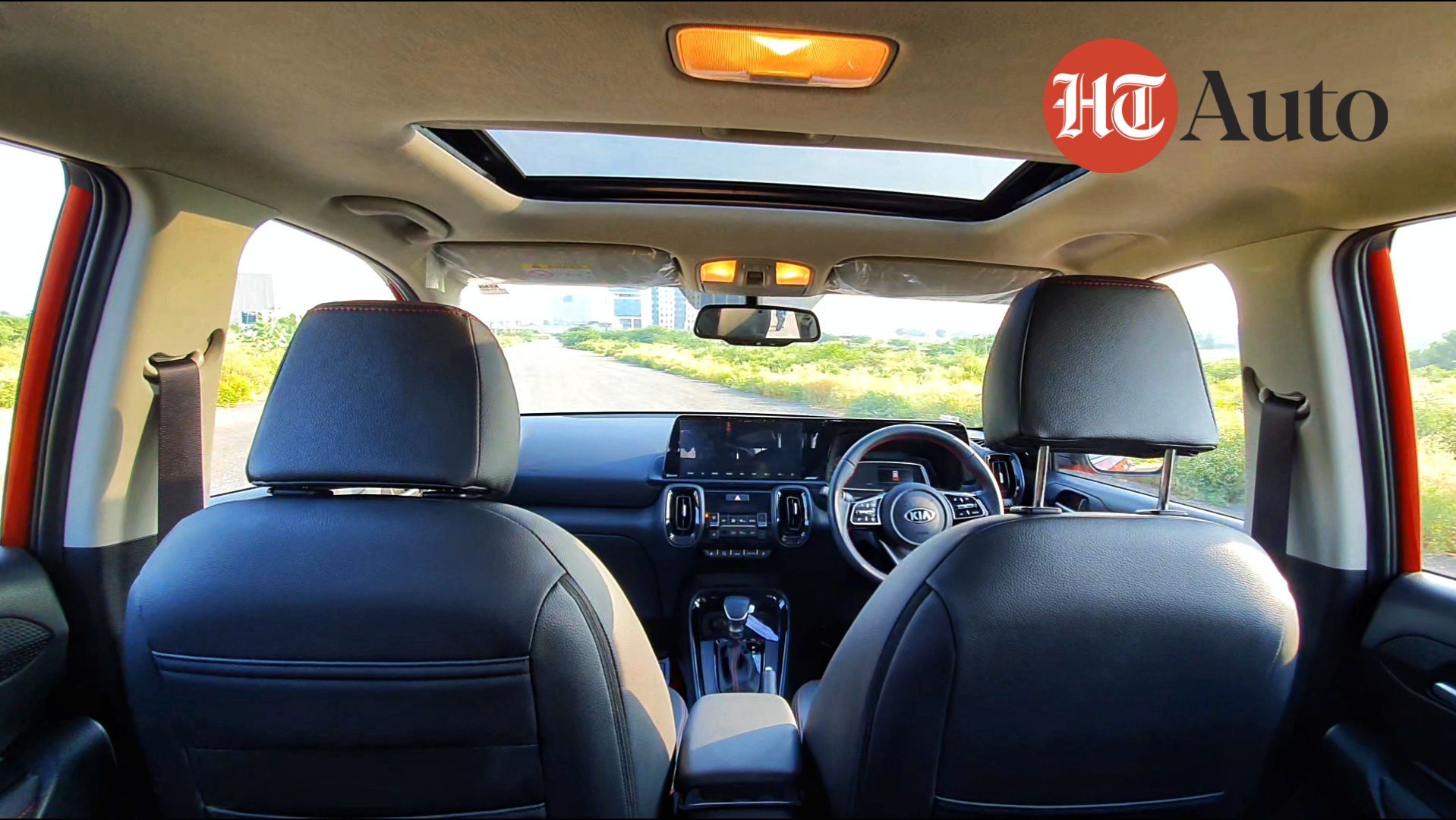 The only downside of the Sonet's second row is the overall space.

Sonet is all about extensive options list, be it in terms of its variants, features, engine or transmission. There’s so much to the Sonet and it is anything but basic. It gets 4 different engine and 5 transmission options. And we got a chance to drive the 1.0-litre turbo petrol engine with 6-speed iMT transmission first.

The engine feels surprisingly refined and sporty from the word go and picks up pace in no time. There is a surge from 2,000 rpm - 3000 rpm, thereafter the power is linearly spread throughout the rev range. The engine also has enough torque whenever making quick transitions on the highway to overtake another vehicles. And within the city limits, it is fairly quite and convenient. Coming on to the iMT, the gearbox is the same as seen on the Hyundai Venue. It is basically a manual minus a clutch. All you need to do is change the gears without the clutch and let the left leg go to sleep.

We also got a chance to drive the (115 PS/250 Nm) 1.5-litre diesel with a 6-speed smart AT gearbox. The higher torque on the diesel was visible from as low as 2,000 rpm and the engine had a very strong mid-range punch as you’d expect from unit of its size. It felt punchy and very responsive which can also be credited to its 6-speed smart AT gearbox which shifts gears quickly and there’s no significant lag felt when moving up or down the gears. Perhaps one of the best engine/transmission combo on the entire Sonet lineup. 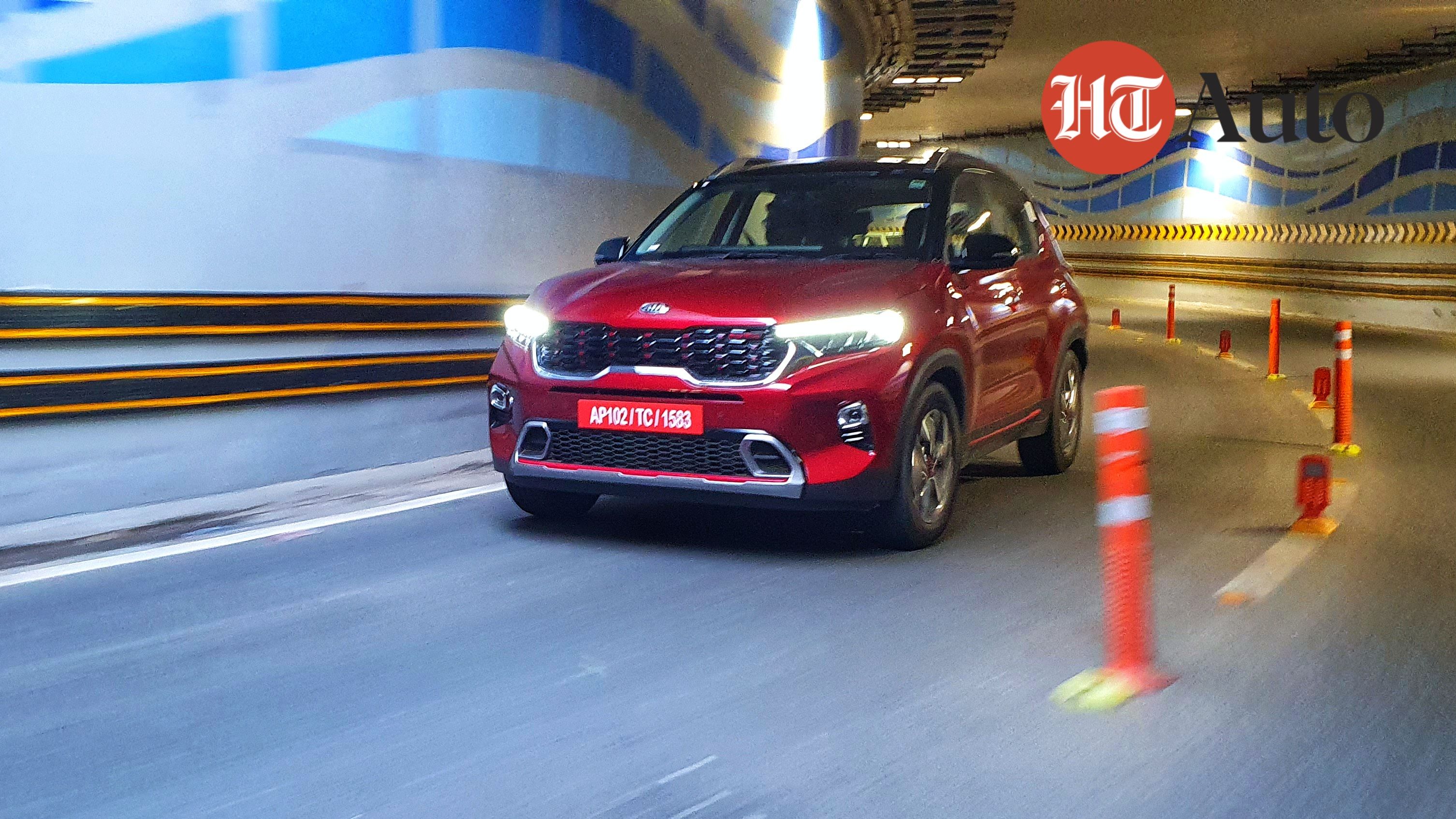 How is the ride quality?

The suspension setup feels balanced but it is slightly on the stiffer side, unlike the Venue which has a softer ride. Thanks to the slightly stiffer geometry, it promises to keep the driver engaged around the corners and at the same time, tries to soaks up all the undulations. Also, there isn't much body roll to talk about whenever you are hugging a corner.

While the suspension feels balanced, and manages to iron out all the 'minor undulations' on the city roads, slightly stiffer tuning gives it a harsh and bumpy ride on uneven surfaces. So if your city has bad roads, Sonet might may not be the wisest choice to go with. 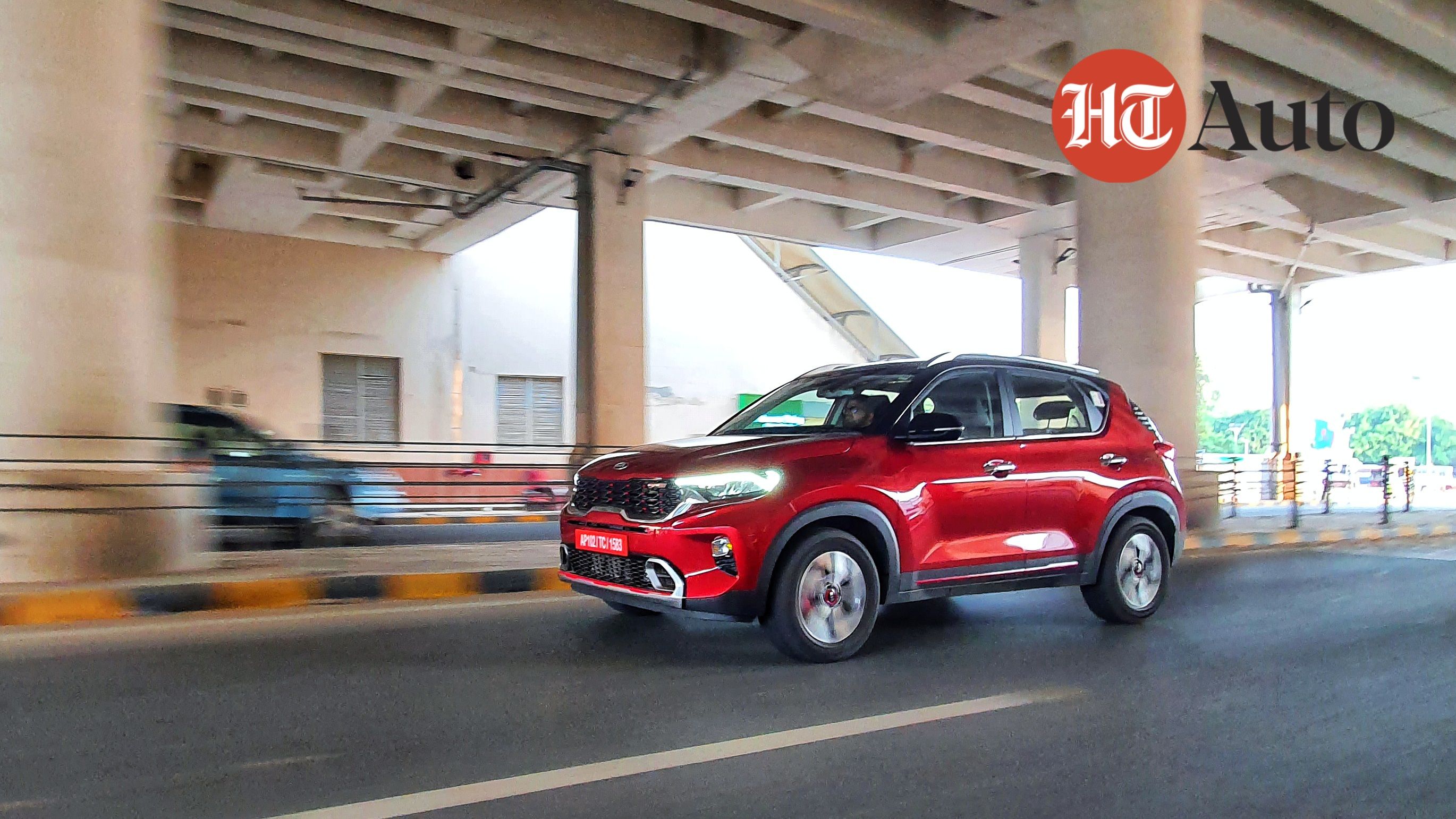 If your city has bad roads, Sonet might may not be the wisest choice to go with.

Looks like Kia has another potential winner in its hand in the form of the Sonet and why is that? It’s easy, Sonet has everything needed to set the segment on fire and if Kia once again gets the pricing right as it did with the Seltos, Sonet will help Kia to cement its position further in the market. Also it will be rather interesting to see how it fares against its arch rival the Hyundai Venue, which is basically the same wine in a different bottle!