Kia rides in the 2020 Picanto facelift

The facelifted Kia Picanto has been officially revealed in South Korea. It is known by the name 'Kia Morning' in its home market. With the recent update, the Kia Picanto has received a host of new exterior styling tweaks.
By : Prashant Singh
| Updated on: 19 May 2020, 02:42 PM 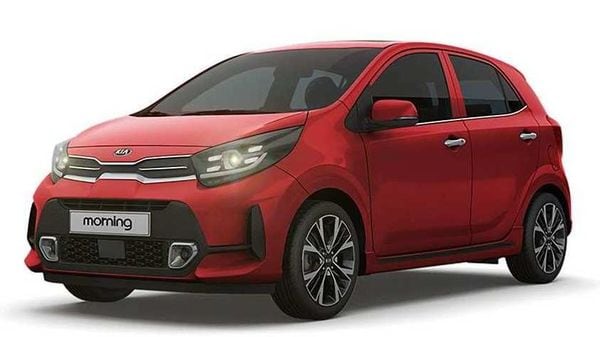 The 2020 Kia Picanto facelift has been revealed in South Korea. The pint-sized car is known by the name 'Kia Morning' in its home market. With the mid-cycle update, the hatchback has received a host of new exterior styling tweaks.

For starters, the Kia Picanto is now a sportier looking hatchback thanks to its updated ‘tiger nose’ grille, revised LED projector headlamps which sport DRLs and remastered front bumper.

Over the sides, the overall profile looks relatively unchanged and the only difference is the introduction of new alloy wheels. Its rear-fascia gets tweaked tail-lamps which now get LED detailing. Also the rear-bumper sports updated styling and the car also features a faux diffuser-like element with chrome detailing.

Inside, the 2020 Picanto uses new coloured inserts on the air-con vents situated on the sides and similar treatment is also found on its new gearbox console. Apart from that, there is also a new larger 8.0-inch floating touchscreen which sits directly above the centrally located air-con vents. The hatchback has also been updated with a new Bluetooth Multi Connection function which permits the user to parallel-connect two smartphones with the infotainment system.

As for the mechanical updates, the car employs a 76 PS, 1.0-litre naturally aspirated petrol engine which comes hooked to either a 4-speed automatic or a 5-speed manual transmission.

For the uninitiated, the Kia Picanto is a technical cousin of the Hyundai i10.

As far as Indian market is concerned, there is no confirmation of the Kia Picanto's arrival in the country. Kia currently has the Seltos and Carnival in the market, while a sub-4 metre compact SUV 'Sonet' is said to arrive soon. The same was also showcased as a concept months ago at the Auto Expo 2020.