Kia Carens, once launched, will be taking a straight aim at Hyundai Alcazar. While Alcazar starts at around ₹16.30 lakh, the pricing of Carens will be announced come February.
By : Shubhodeep Chakravarty
| Updated on: 31 Jan 2022, 13:37 PM

Kia Carens and Hyundai Alcazar are cousins but each model is looking at having a greater say in the fast growing sub ₹20 lakh three-row segment.

Kia Carens is all set to hit Indian roads come February and the latest three-row vehicle is directly aimed at finding the fancy of customers who have large families and have a need for a car that is nimble within the city but is also spacious for highway journeys. The fourth product from Kia, after Seltos, Sonet and Carnival, the Kia Carens will directly face off against Hyundai Alcazar which was launched last year.

While three-row SUVs and MPVs under ₹20 lakhs have emerged as a viable segment for many automotive brands, sales figures aren't exactly comparable to those in the mid-size SUV space. Not yet anyway. But that has hardly deterred OEMs from entering the field of play and the Carens, in this sense, is making big promises.

So how does the Kia Carens stand its ground against its cousin Hyundai Alcazar? Here's a straight-forward comparison in terms of engine and transmission options, dimensions and the features available on both Korean models.

The Koreans are sticking around with diesel engines at a time when many others are going in with a petrol-only strategy. As such, the Kia Carens is offered with a 1.4-turbo petrol, a 1.5 petrol and a 1.5-diesel engine options.

The Alcazar is offered with two engine options. There is a 2.0-litre MPi petrol engine and a 1.5-litre diesel motor. Both these engines come paired with either a six-speed manual or AT options.

In terms of styling, both Carens and Alcazar are a cross between SUV and MPV. But while Alcazar looks more like an SUV, Carens leans significantly towards the MPV styling. Kia terms the Carens as an RV or recreational vehicle. 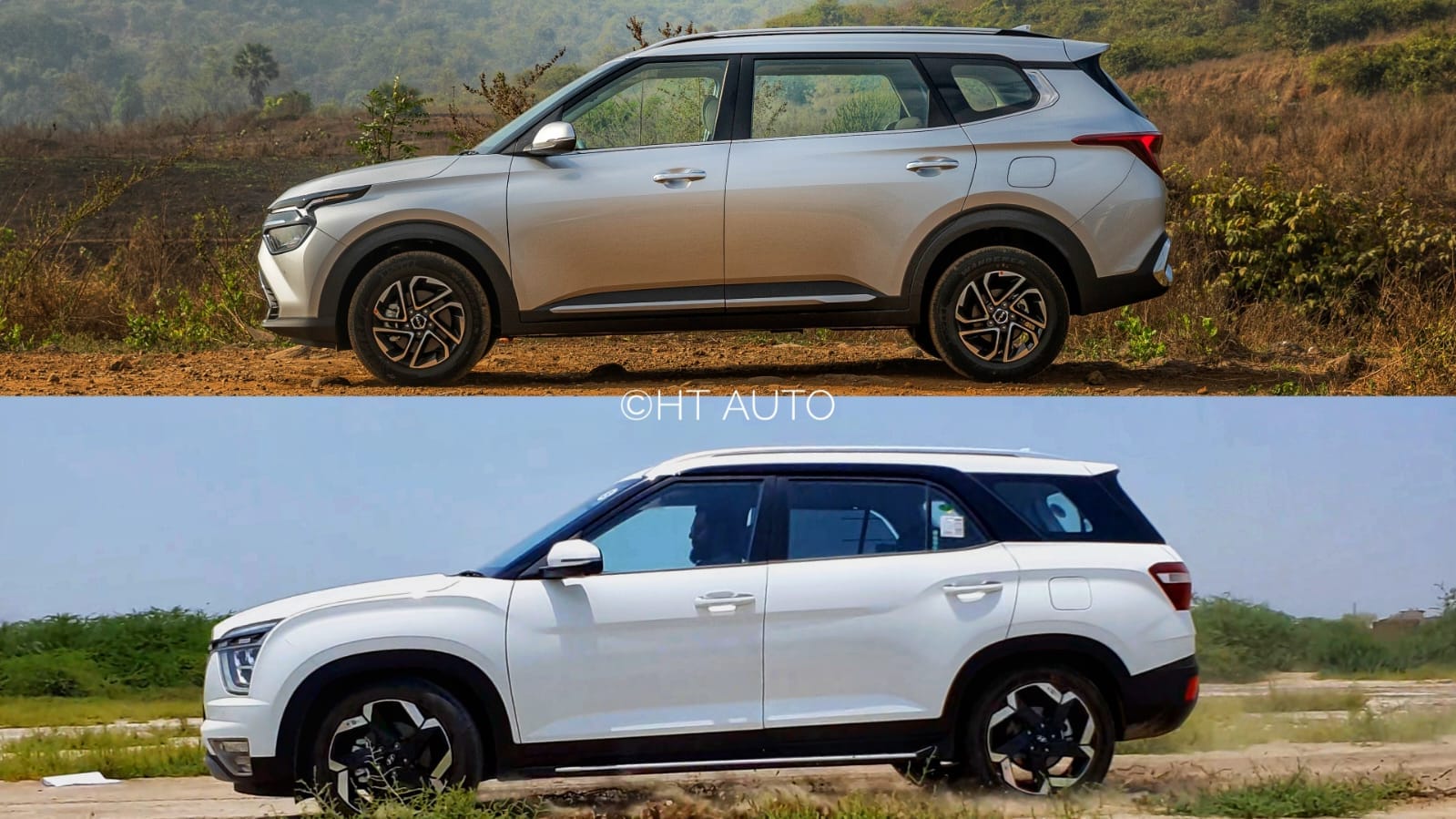 There is not much difference in terms of exterior dimensions between Kia Carens (top) and the Hyundai Alcazar.

In numeric terms, there is only a marginal difference in exterior dimensions of the two vehicles. Carens is slightly longer, wider and taller, and with a very slight advantage in terms of wheelbase as well.

In terms of seat layout, both vehicles offer buyers a choice to select between six or seven seats.

In terms of styling, while Alcazar clearly looks like it belongs to the same family as the Creta, the same cannot be said about Carens and Seltos.

The Koreans are known to pack their cars with features galore and the Carens and Alcazar both benefit enormously from a cabin that is loaded to the brim with convenience, comfort and safety additions. 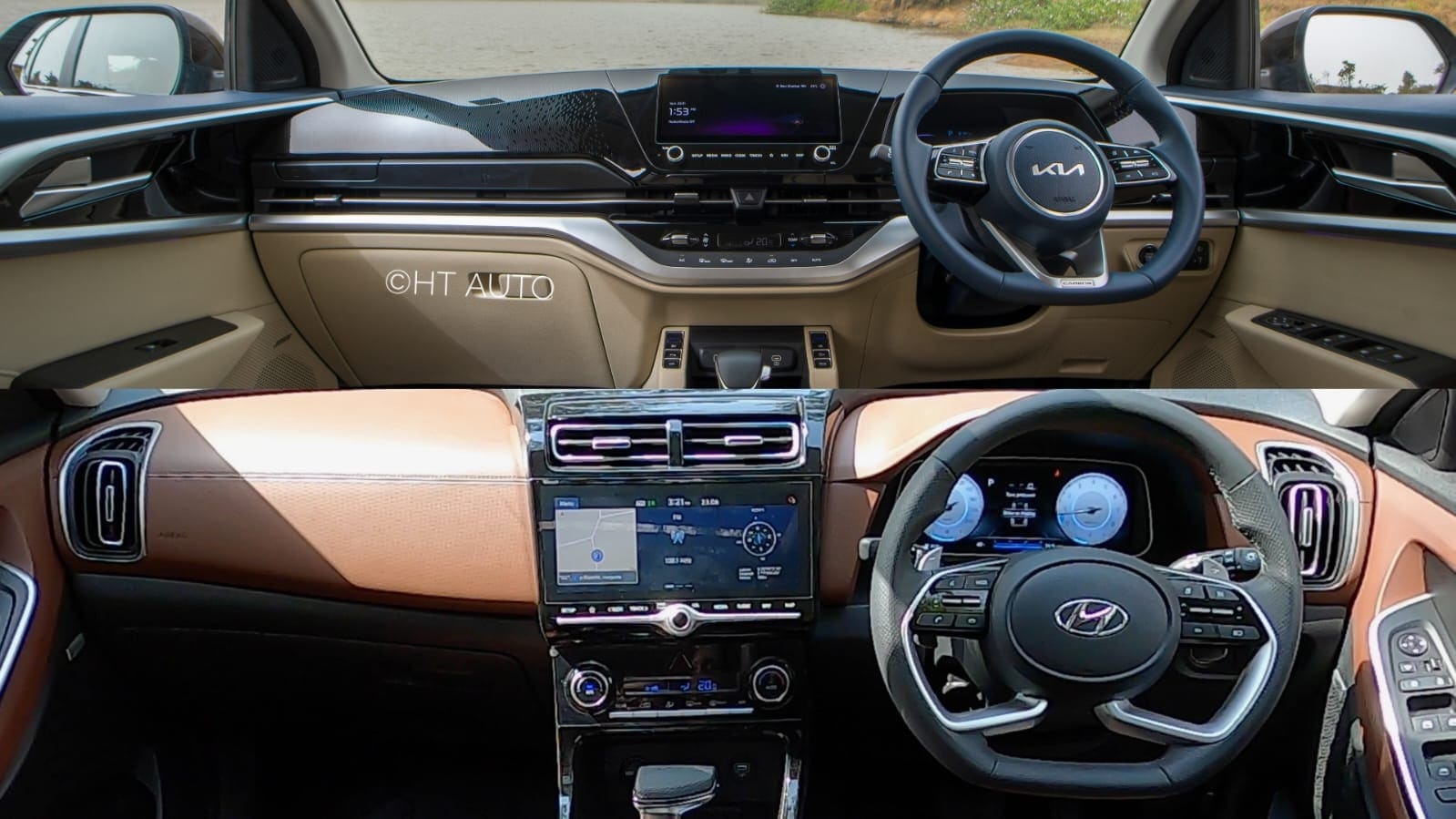 A look at the dashboard layout of Kia Carens (top) and Hyundai Alcazar.

Carens will be made available in five variants - Premium, Prestige, Prestige Plus, Luxury, and Luxury Plus. The top variant packs several highlights like a 10.25-inch main infotainment screen, wireless connectivity for Apple CarPlay and Android Auto, 64-colour ambient lighting, air purifier, digital driver display and a sunroof, among others.

The Alcazar also gets most of these features but packs in a larger sunroof, a blind-spot detection feed and a central armrest in the second row that has a wireless charger.

It may be a close call when it comes to comfort and convenience features but Carens packs more safety features as standard than the Hyundai. This includes six airbags, disc brakes on all four wheels, TPMS, rear parking sensors and downhill brake control. It also has multiple cabin colour options to choose from.

LML returns to India with three EVs, first one to launch early next year

In pics: Citroen Oli concept can go up to 400 km on a single charge