Kia Carens production starts, first unit rolls out ahead of launch next month

Kia India will launch the three-row Carens, with both six- and seven-seater options, in February. It will take on rivals like the Hyundai Alcazar, Mahindra XUV700, Tata Safari among others.
By : HT Auto Desk
| Updated on: 31 Jan 2022, 05:24 PM 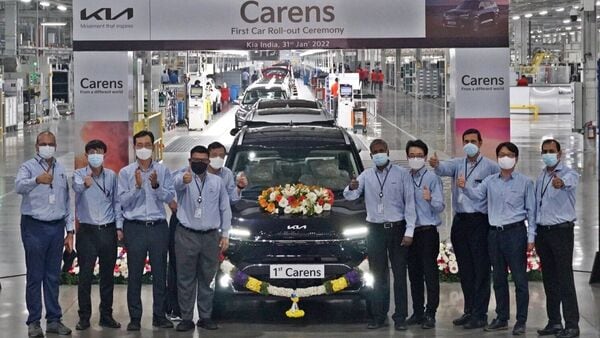 Kia India rolls out first unit of Carens from Anantapur facility ahead of launch.

Kia has started the production of Carens, its upcoming three-row recreational vehicle (RV). The Korean carmaker has rolled out the first unit of Kia Carens from its Anantapur manufacturing facility in Andhra Pradesh today.

Kia Carens is going to be the Korean carmaker's fourth model in Indian market. The carmaker has confirmed that the MPV with SUVish styling and features will be launched in February.

Kia Carens will be manufactured in India and exported to over 80 countries. "With the Kia Carens, we bring to the table a whole new set of value propositions aligning with requirements of the new-age customer. I am excited about the beginning of this new journey," said Tae-Jin Park, Managing Director and CEO at Kia India.

"Our teams have worked tirelessly to bring out a product that truly reflects and resonates with modern Indian families," Park added.

The Kia Carens will come with both petrol and diesel powertrains. Under the hood, Carens will offer a 1.4-turbo petrol, a 1.5 petrol and a 1.5-diesel engine options. The engines will come mated to either a six-speed manual or automatic, as well as including the seven-speed DCT (dual-clutch transmission) gearbox.

Carens will be made available in five variants - Premium, Prestige, Prestige Plus, Luxury, and Luxury Plus. The top variant packs several highlights like a 10.25-inch main infotainment screen, wireless connectivity for Apple CarPlay and Android Auto, 64-colour ambient lighting, air purifier, digital driver display and a sunroof, among others.

Kia Carens is likely to be priced between ₹14 lakh and ₹20 lakh (ex-showroom) when launched. The fourth product from Kia, after Seltos, Sonet and Carnival, the Kia Carens will directly face off against Hyundai Alcazar which was launched last year.