Jeep Commander SUV, which is basically the three-row version of the Compass SUV, is likely to hit Indian shores soon by the name Meridian. It will rival the likes of upcoming Volkswagen Tiguan, MG Gloster and others.
By : HT Auto Desk
| Written By : Sabyasachi Dasgupta
| Updated on: 27 Aug 2021, 09:12 AM Jeep Commander 7-seater SUV, which is likely to be called Meridian when brought to India, has been launched for the South American markets.

Jeep has officially launched the Commander, a three-row SUV based on the Compass, in the South American markets. Jeep Commander has been completely built at the carmaker's Pernambuco facility in Brazil and is based on the same platform used for Compass, Renegade and other Jeep models.

For the South American markets, Jeep is offering Commander SUV in two trims called Limited and Overland. While the Limited variant gets a 4X2 wheel drive system, the Overland trim gets a 4X4 mode.

The Commander’s exterior is highlighted by a typical Jeep design, consisting of a grille with seven slats flanked on each sides by the full-LED headlamps. On the sides are the trapezoidal wheel arches, along with a much straighter sideline than on the Compass. The Commander SUV for the South American markets is offered with a standard 18-inch wheels. It can be upgraded to 19-inch wheels in the Overland variant. 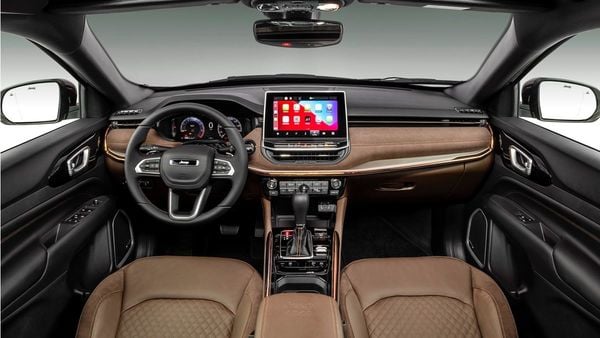 The interior of the Jeep Commander SUV is dominated by a 10.1 inch Full HD wide touchscreen infotainment system and an even bigger 10.25 inch fully digital instrument cluster.

The Commander's interior is also quite similar to that of the Compass SUV. It gets a 10.1-inch Full HD wide touchscreen infotainment system and an even bigger 10.25-inch fully digital instrument cluster. There are nine Harman Kardon speakers with 450 watts capacity. The Overland version also comes with the Alexa virtual assistant.

Jeep Commander has a large boot space that can hold 233 litres at least with all seven seats up. However, it can be increased to up to 661 liters with the third row seats down. If the last two rows are folded, the luggage capacity jumps to an impressive 1,760 litres.

There are two transmission options, the first being six-speed automatic for front-wheel drive editions. The second, with nine gears, is for diesel powered options.

The Commander SUV comes with seven airbags (two front, two side, two curtain and one for the driver's knee) and all the semi-autonomous systems of the ADAS, which translates to Advanced Driver Assistance Systems as some of the key safety features. The list includes adaptive cruise control (accelerate, brake to full and exit again, useful in traffic situations, for example), collision alert with automatic braking, blind spot and cross traffic detector, shift alert lane, emergency braking for pedestrians, cyclists or motorcyclists, fatigue detector, license plate recognition, automatic high beam and park assist.