Hyundai Venue is the first car in India to offer clutch-less transmission. The SX Turbo Venue seeks to offer striking visual elements and the comfort of an iMT unit.
By : Shubhodeep Chakravarty
| Updated on: 31 Aug 2020, 05:20 PM 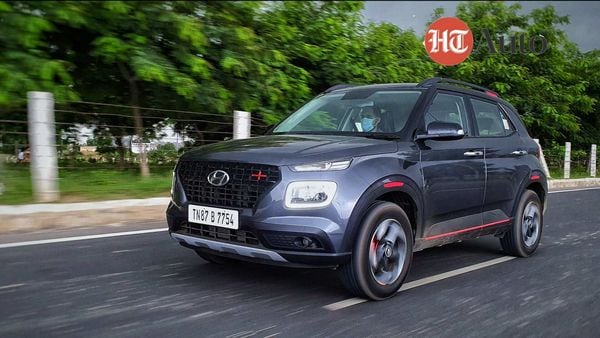 In a world fast being taken over by vehicles with automatic transmission, the gearbox is becoming less significant with passing time. And yet, the gearbox is one of the most crucial aspects on an engaging drive, especially for enthusiasts who love to be in absolute control of their vehicle and how it performs in a wide variety of conditions. In what, therefore, promises to be a perfect balance between the best of both worlds, Hyundai has equipped its very popular Venue with an Intelligent Manual Transmission (iMT) - a first in any car on Indian roads - to offer both comfort in start-stop traffic as well as the enthusiasm of slotting gears.

Is it a gimmick or does the iMT technology have the potential of offering unparalleled practicality and driving convenience which could rival even the best of automatic transmissions? I drove the Venue iMT Sport to find out.

Before elaborating on the mechanical change in the Venue iMT, it is quite important to focus on the visual additions that makes the car sportier. Yes, Hyundai has brought in the Venue Sport which focuses on red accents on the outside - as well as in the cabin - to give it a more youthful appeal. And while these are cosmetic in nature, the additions to end up giving the sub-compact SUV a more appealing look. 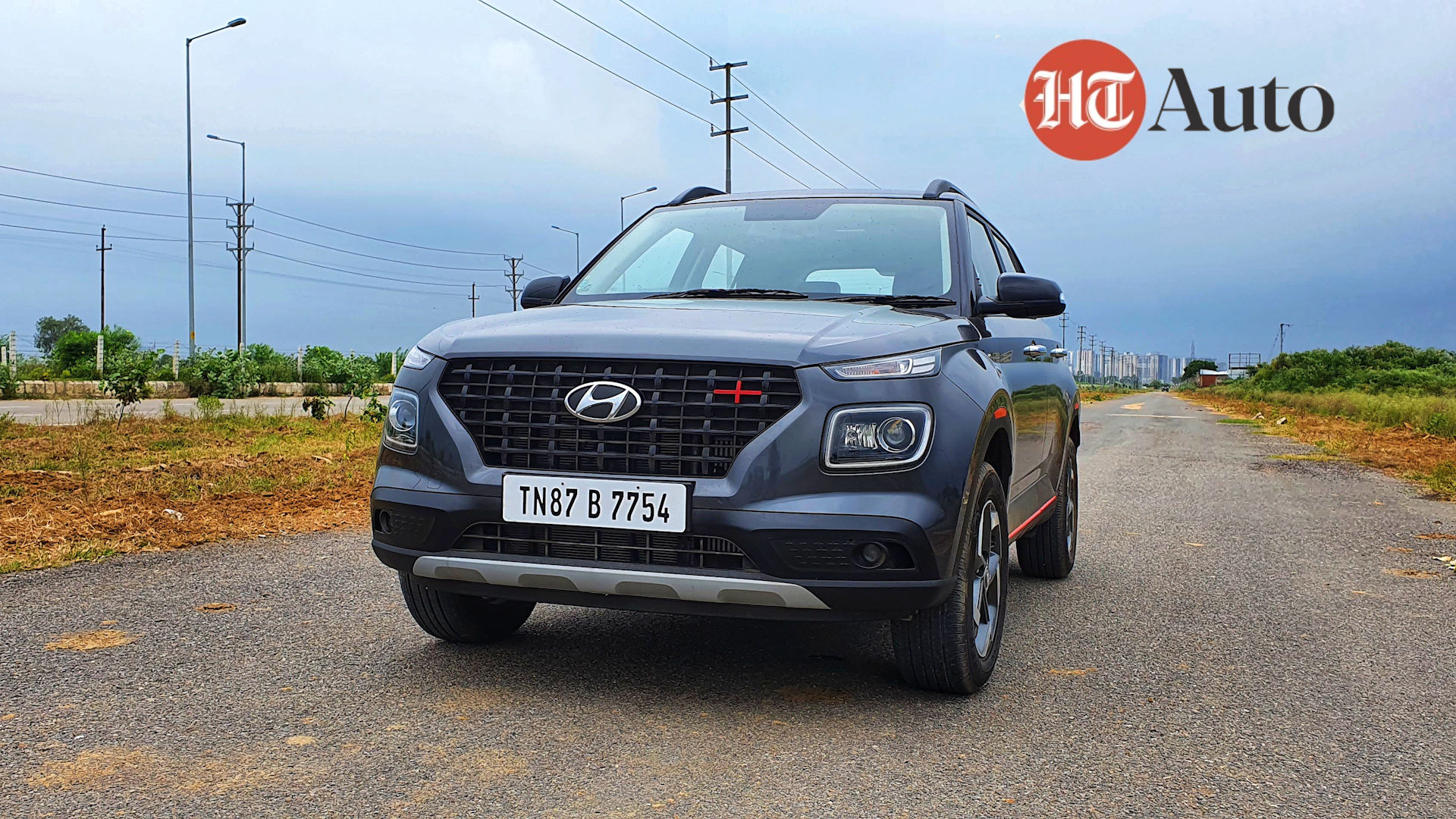 Hyundai remains committed to the visual appeal of the Venue which now comes with the option of dual-tone colours. (Photo: Sabyasachi Dasgupta/HTAuto)

My test unit was in a subtle dual-tone grey and black colour scheme which means the roof, roof rails, ORVMs and even the front bumper were black which contrasted against the overlaying grey theme of the vehicle. The front bumper also features a red 'plus' sign to denote that this here is the Venue Sport variant. The brake calipers are red and so is a minor tape-like strip on the wheel arches. There is a red strip across the side doors while there is a similar dash on the roof rail as well. 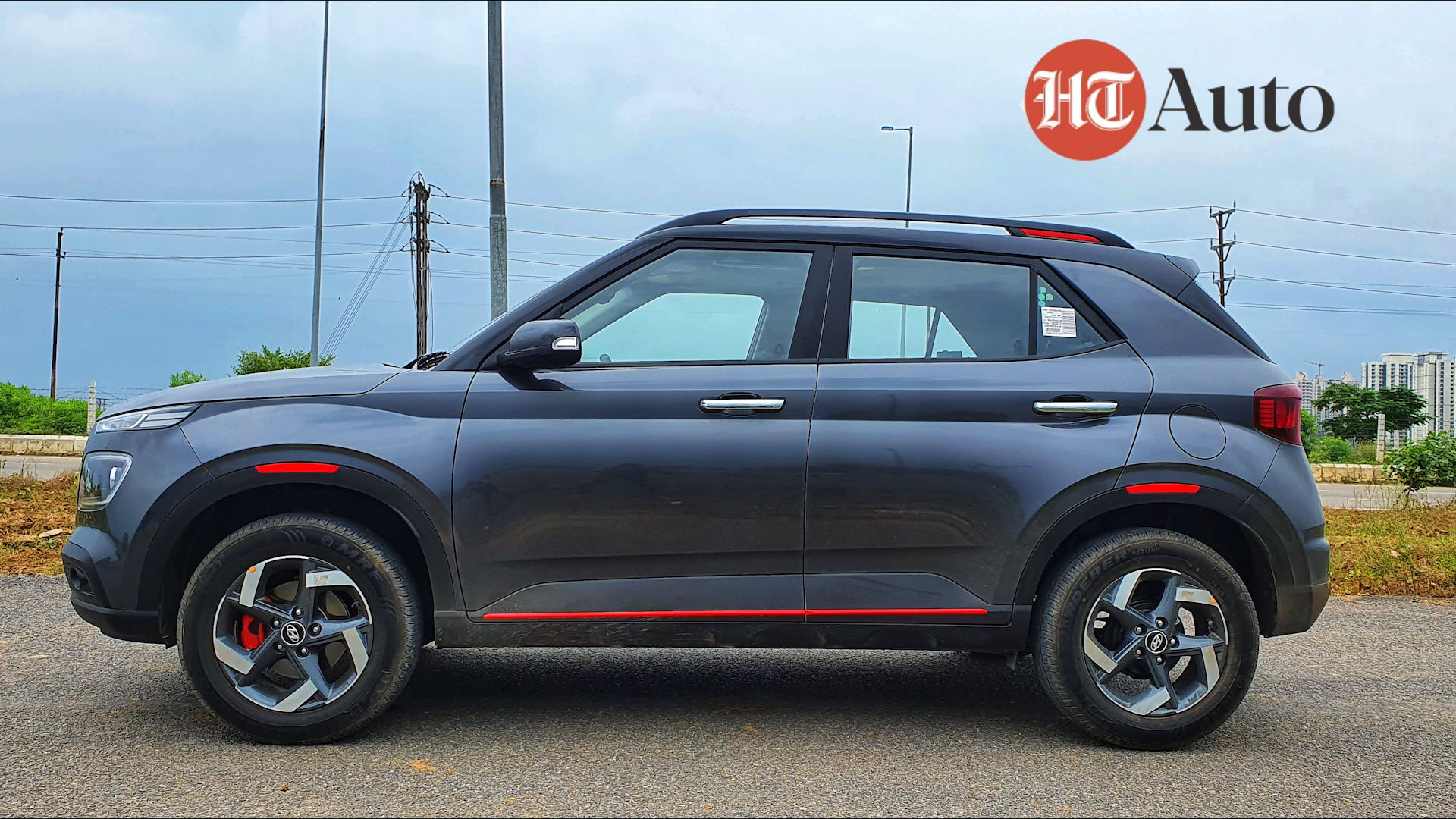 The emphasis on the red accents are cosmetic in nature but do lend the Venue a more sporty visual appeal which is the primary objective. (Photo: Sabyasachi Dasgupta/HT Auto)

And if all of these don't scream out the more athletic visual credentials, there is a 'Sport' badge on the side as well. The rear profile is where the focus on the red theme is perhaps at its absolute minimum. 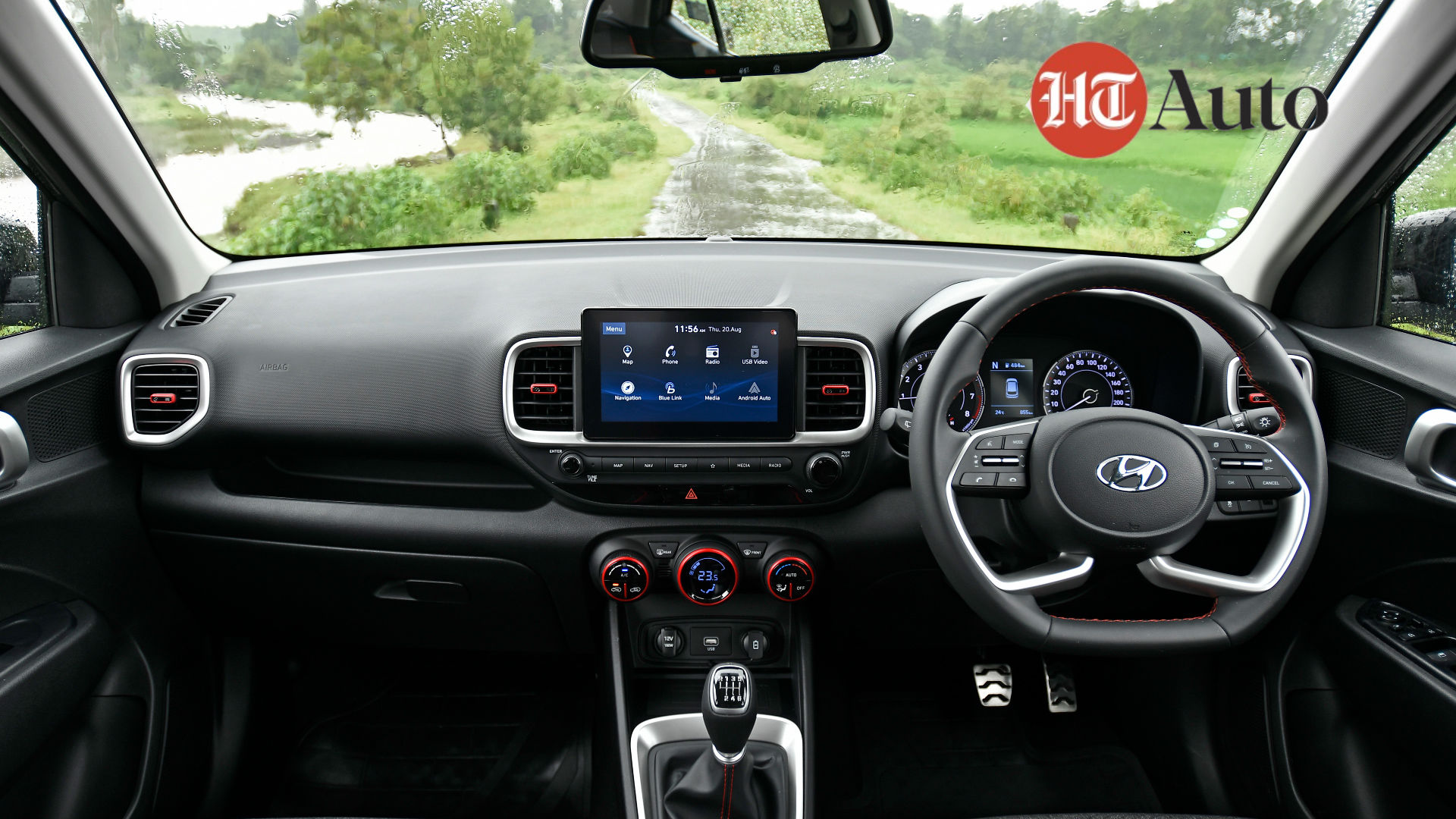 The Venue Sport has a more visually engaging appeal than the regular variant and is likely to be favoured by a younger demographic. (Photo: Sabyasachi Dasgupta/HT Auto)

The interiors of the Venue Sport remains similar to the regular variant, barring - once again - the ample additions of red colour notes. So, the air vent knob has a pinch of red and the AC control are encircled by the same hue as well. The stitching upholstery is also visibly red in its visual cue and once again, while all of these are rather superficial in nature, there is no denying that it can appeal to a younger car buying audience which is powering the sub-compact SUV segment in the country.

The cabin remains adequately spacious with decent quality levels of upholstery and plastics. Not that there is any change in this regard in the Sport trim in particular - save for the missing clutch pedal.

And this brings me to the single biggest change and striking highlight of the Hyundai Venue Sport iMT.

Venue with iMT is a balanced performer in city roads and open highways. (Photo: Sabyasachi Dasgupta/HTAuto)

So what is iMT and what's the big deal about it. Theoretically speaking, it is - as the name itself suggests - an intelligent manual transmission system which negates the need for you to press on the clutch pedal. In fact, there is no clutch pedal to press. The on-board computer system engages the clutch on your behalf which, in real world conditions, mean that you left foot can finally rest in a car that still offers the fun of engaging the gear.

Practically speaking, getting accustomed to an iMT is absolutely effortless and it is almost as effortless to drive as a vehicle with automatic transmission vehicle. Almost.

Thanks to its compact proportions, the Venue has always been a slick performer in city roads but the iMT just makes so much more interesting when one does decide to take the road most taken by all. Sudden rain during this test drive meant I was stuck in bumper-to-bumper traffic for 90 minutes on Delhi-Noida-Delhi expressway but the crawl - while frustrating -was hardly exhausting. I kept engaging the car's gear from neutral to the first and back to neutral but because I did not have to press the clutch and let it go for all of those 90 minutes, it was almost as convenient as being in a car with an automatic transmission.

And when the road did open up, the enthusiastic fun of an iMT greatly outpaced that of an auto unit. 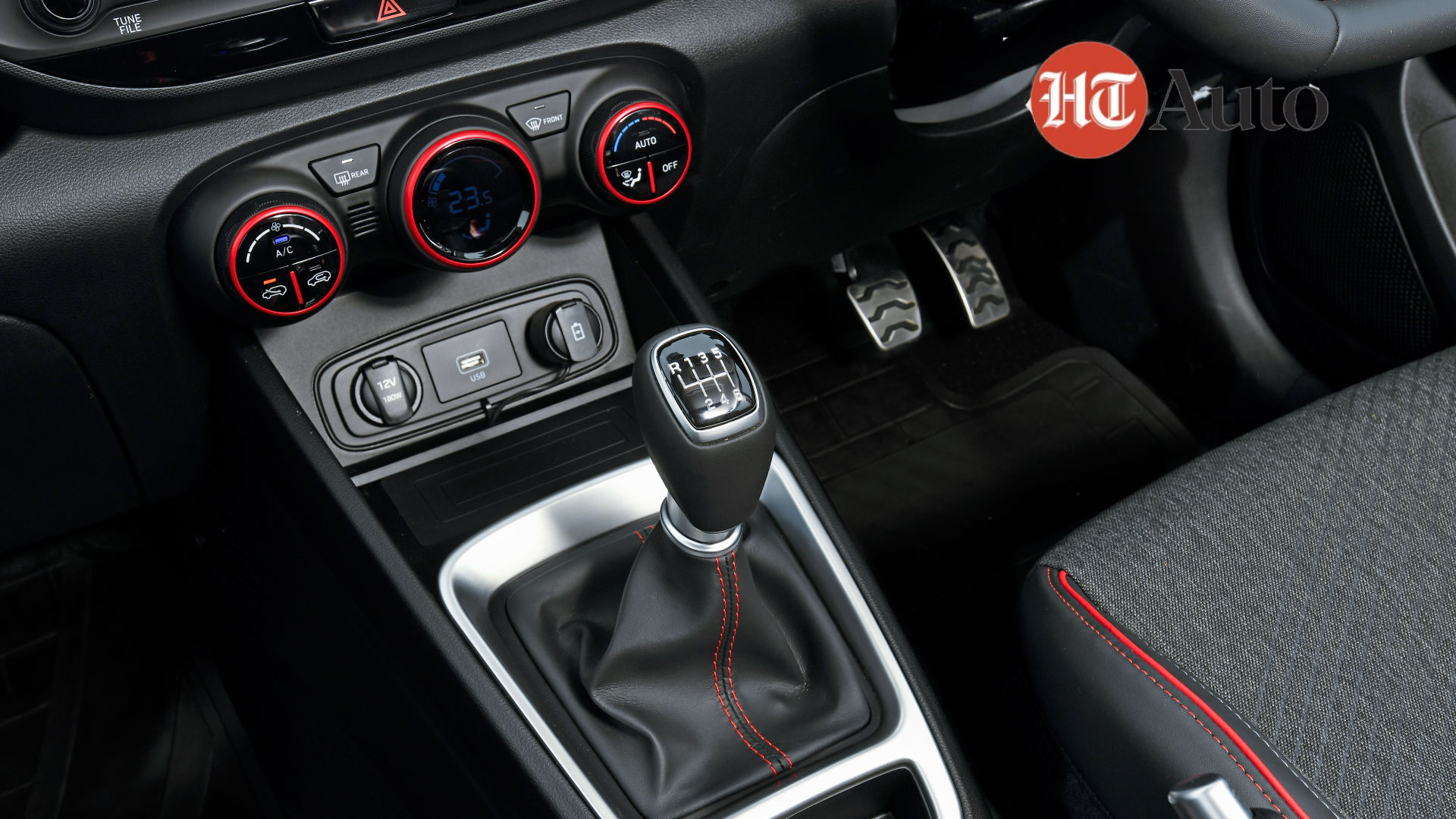 Venue iMT can get a move on from even the second gear and does not stall with stutter if you bring it back to a standstill with the gear still engaged. (Photo: Sabyasachi Dasgupta/HTAuto)

Yes, this six-speed manual gearbox is a top performer and with the clutch thrown out of play, it raises to the occasion to help you slot it exactly where you would want for that extra bit of push. The 1.0-litre turbo engine remains as eager as ever and while the car won't hurl itself forward as well as in a manual, it is still in an enthusiastic form.

Working through the gears is slippery smooth and that works really well - whether on city roads or on highways. The Venue gobbles up miles with a sense of youthful exuberance and shifting up or down is a charm indeed.

iMT may sound complicated but it is actually anything but that.

Venue iMT is all about losing the clutch and yet retaining the gearbox as it is in the manual variants. Press the brake and push the engine start/stop button as you would in an automatic car. Hereon, work the gears as you would in a manual transmission. And that's really all to it.

The stationery Venue iMT can pick up from second gear as well but taking off from a gear any higher than this will issue an alert and is not possible. Also, when working the gear unit, it is a whole lot smoother to lay off the gas pedal for that micro second for that smooth shift mentioned above. If you do keep the accelerator pressed, the shift still happens but loses its refined character.

Reversing the Venue iMT is also as one would reverse any vehicle while if there is an urgent braking and the gear remains in a higher slot, there will be an alert sound asking for the gear number to be lowered.

There is, however, no un-nerving jerk and stop if you do choose to bring the car to a stop in either the first or second. For first-time learners, the iMT is like a crash course, that guide book that promises to quickly pace you up with the entire syllabus.

Hyundai is clearly prepping the Venue to take on the upcoming Kia Sonet which too will have a clutch-less transmission option. The battle in the sub-compact SUV segment is already hot and is likely to explode once newer rivals enter the field of play. To possibly keep a firm hold on the lead, every established product will have to reinvent itself and the while the cosmetic updates on the Sport Turbo is a step in the familiar direction, the iMT is a giant leap in a new frontier. 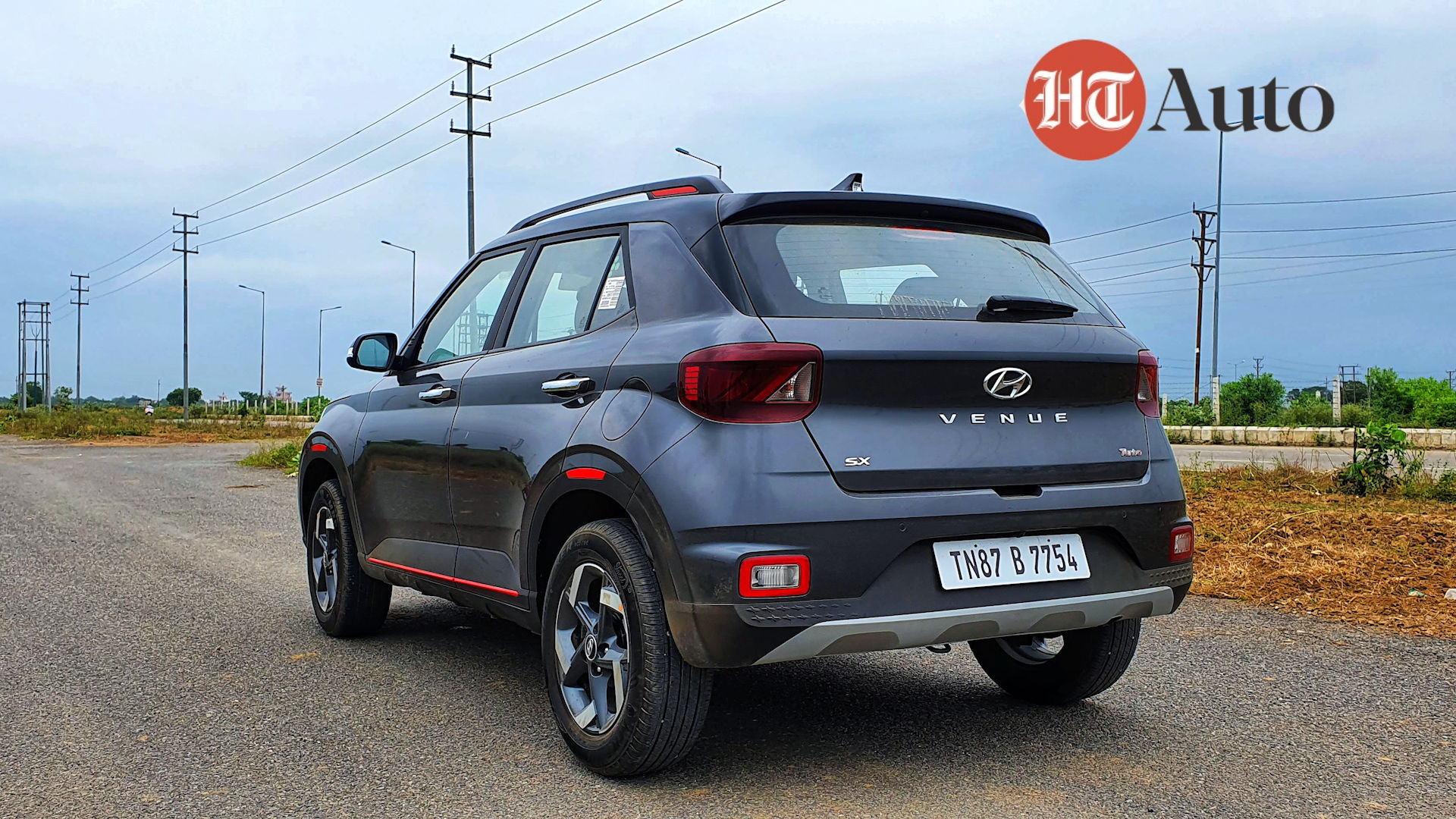 Will the iMT gearbox last the test of time? There is no reason to believe it won't because it essentially is the same as a manual unit barring a little computer helping you with the clutch.

Will the mileage get affected? Unless you keep the car engaged in the first or second gear in start/stop traffic, there is also no reason to believe that fuel efficiency will be any different than in the manual unit.

Should you consider the Venue iMT? I would give a big thumbs up to the technology itself and am fairly confident that it will soon make its way to not just other Hyundai products but make a mark in the passenger vehicle segment as a whole.

At a little over ₹10 lakh (ex showroom), the Venue iMT is just a shade more expensive than the regular manual version but is considerably more affordable than the automatic DCT.

For someone stretching the budget to the absolute maximum, the manual unit of the Venue still may make more financial sense. For those looking at the absolute comfort of an auto transmission with no need to even slot gears manually, the auto DCT Venue remains a viable option. But if you are an eager driver who also does long city commutes, the iMT makes perfect sense.