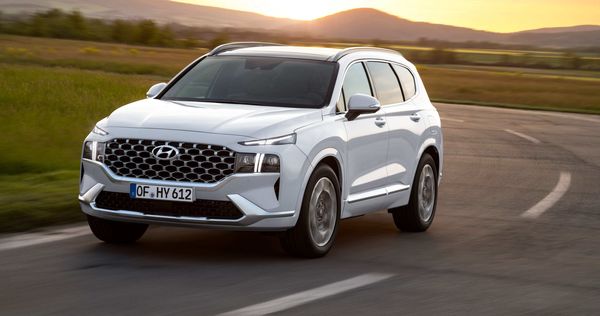 After digitally unveiling the new Santa Fe last month, Hyundai Motor has revealed the powertrain options for its variants. The new Santa Fe will be available with a hybrid and a plug-in hybrid variant early next year.

The hybrid variant will be powered by a 1.6-litre petrol engine, a 59 hp electric motor and a 1.49 kWh lithium-ion battery. This will give a combined output of 227 hp of power and 350 Nm of torque.

The plug-in hybrid variant with all-wheel drive, scheduled to be launched next year, will be powered by the same 1.6-litre engine, a 13.8 kWh lithium-ion battery and a 90 hp electric motor. It will have a combined output of 261 hp of power and 350 Nm of torque.

The diesel variant will be powered by a 2.2-litre four-cylinder Smartstream engine, mated to a new 8-speed dual-clutch gearbox. It will be able to produce 199 hp of power and 440 Nm of torque.

Besides the details about the powertrain, Hyundai has also revealed the new platform on which the new Santa Fe SUV is built. The new Santa Fe is the first Hyundai model in Europe and first Hyundai SUV globally based on the all-new third-generation Hyundai vehicle platform. The new platform allows for significant improvements in performance, handling, fuel efficiency and safety.

(Also see pics: What has changed in the 2020 Hyundai Santa Fe SUV)

By applying a multiple inlet air-curtain, the flow field around the wheels is improved. In addition, due to the efficient undercover configuration in the new platform, the aerodynamic force underneath the vehicle has been significantly decreased. Vehicle stability is enhanced by the lowered position of heavy equipment within the platform, which reduces weight and lowers the centre of gravity. Aerodynamics have also been improved so that air resistance is minimised to deliver excellent fuel efficiency, power and driving performance.

The fixed points for the steering arms have been positioned closer to the middle of the front wheels, allowing for more agile handling. Meanwhile, noise, vibration and harshness (NVH) performance is improved through reinforced sound-absorbing systems in vibration-sensitive parts.

The new platform also brings with it significant improvements in collision safety, thanks to improvements in engineering. Through the use of a multi-load path structure, hot stamping, and the integration of a super high-tensile steel plate, the platform will enable the car to better absorb the impact in the event of a collision while at the same time minimising the deformation of the passenger space.

The intelligent packaging of the new platform means the battery pack can be located beneath the passenger seat in the hybrid version and beneath the driver and passenger seats in the plug-in hybrid version, with no impact on cabin or luggage space. As a result of the platform update, the new Santa Fe offers an additional three centimetres of second-row leg room and additional four centimetres of third-row leg room.