The Hyundai Prophecy Concept EV made its digital premiere last month. The Prophecy concept was supposed to be unveiled at the Geneva Motor Show, but the cancellation of the event made to the manufacturer alter plans and show only a few static photos of the prototype. Now Hyundai has shared new photos and details about the concept EV.

Hyundai has released new pictures of the car along with two videos in which the chief designer of the company, Luc Donkervolke, revealed details about the prototype.

Speaking about the design of the car, Donkervolke pointed out as a source of inspiration vintage coupes of the 1920s and 1930s of the last century. Although the smooth bends of the concept are also strikingly similar to some Porsche models. Also, the chief designer of Hyundai noted that the company never makes prototypes just to demonstrate intentions - which means that we can see such rear pillars, unusual optics and a general “merry-like" body style in one of the following models of the South Korean carmaker.

The chances of seeing the same interior in one of the Hyundai cars are much less - it looks too futuristic. Although the two joysticks that are designed to replace the steering wheel look good. They not only add space in the cabin, located on the central armrest and door panel, but also have rich functionality. The driver almost does not have to take his hands off them, because they provide control over most of the functions of the machine. 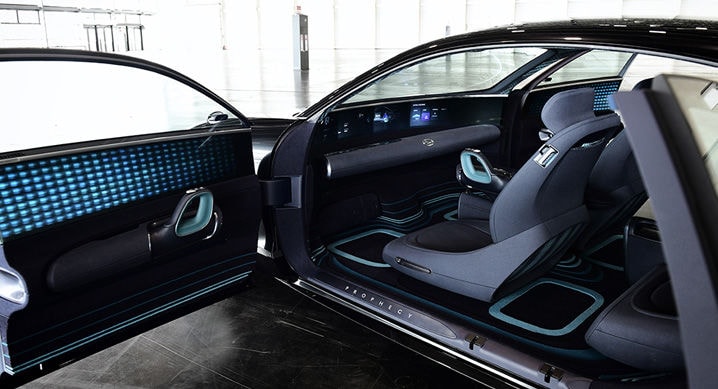 There is still no information on the driving characteristics of the new electric car - neither the electric motor power, nor the range and capacity of the battery are known. What is known for sure is the platform on which a new prototype is being created which is called the E-GMP (Electric Global Modular Platform). It was created specifically for electric cars.

The driver’s seat is equipped with the Smart Posture Care System (SPCS) function, which helps him to choose the most comfortable position based on the characteristics of height, weight and the desired height. The system will also be able to control the projection display, mirror and joysticks. Manual configuration of all these systems for themselves, however, will not go anywhere.

(Check the pictures of the Hyundai Prophecy Concept EV)

Another “trick" of the prototype is also associated with the seats - during parking you can activate the Relax Mode. In this mode, the seats will be installed horizontally, and the virtual dashboard will give way to the screen of the media system. With all this, the glass in the doors is motionless - a special air filtration system must be responsible for the freshness of the air in the cabin, which must respond to dust particles.