Hyundai Casper is the Korean carmaker's upcoming micro SUV, built on the same platform as the Hyundai i10. Casper is likely to launch in the next few weeks.
By : HT Auto Desk
| Updated on: 14 Sep 2021, 10:55 AM 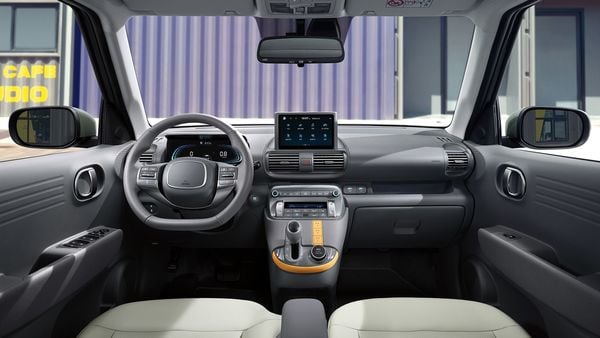 Hyundai is all set to launch Casper, a micro SUV, soon for the global markets. Ahead of the launch, the Korean carmaker has shared more details about the 2022 Casper through a series of images, including the interiors.

Earlier this month, Hyundai had shared the first official images of the Casper micro SUV. It had showcased the exterior design of the car. Casper will get a prominent radiator grille, round head light units, sizeable wheel arches and distinctly curving body lines. In the latest images shared by Hyundai, Casper's rear profile and cabin's design elements as well as features have been revealed.

Hyundai Casper will come with blackened roof spoilers at the rear. It will also get LED pattern taillights that run across the entire length of the bootlid. There is also a large chunky bumper at the rear with silver skid plates that complete the looks. Hyundai Casper also gets roof-rails. However, it is likely to be only for show, and not particularly a functional one.

Step inside, and Hyundai Casper will greet with a cabin that appears quite spacious. It gets a grey-coloured interior theme, interspersed with beige and yellow. The steering wheel in Casper is flat-bottomed and come with mounted controls. The digital instrument cluster appears to be larger in size than the infotainment screen perched on top of the dashboard. The centre console houses climate control buttons, as well as the gear lever and a dial to select traction modes which get yellow highlights.

2022 Hyundai Casper, which is the production version of Hyundai's Project AX1, will be primarily targeted towards city-based customers. The car shares the same platform used for the Hyundai i10, which means it will be smaller in size in comparison the Kona or Venue SUVs.

Hyundai Casper will be offered with the options of a 1.0-litre multi-point injection engine and a turbocharged version of it. The 1.0-litre regular unit will be able to churn out 75 hp of maximum power, while the turbocharged unit is capable of producing 99 hp of power.

Hyundai is also likely to offer Casper micro SUV with a hybrid or full electric engine option later. It could also get a fully electric version soon, which is likely to go into production some time in 2023.

As for the Indian markets, Hyundai is unlikely to offer Casper micro SUV any time soon. However, if launched, Casper will take on rivals like upcoming micros SUVs Tata Punch and Citroen C3.