The sporty version of the popular Hyundai hatchback is under development and will be racetrack capable and street legal.
By : Sabyasachi Dasgupta
| Updated on: 07 May 2020, 09:36 AM 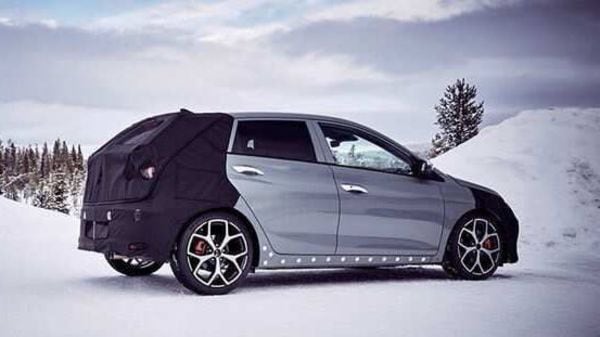 Hyundai Motor has released first images of the all-new i20N in camouflage.

Hyundai Motor has released two new videos and first images of the all-new i20N. The new car was revealed through a video showing winter testing for some of Hyundai's high-performance models, including a prototype of the all-new i20 N in camouflage. The videos, which were shot in Arjeplog, Sweden, show Hyundai WRC driver Thierry Neuville putting the the i20N through their paces in a snowy landscape, along with two other cars - the i20 WRC and the RM19,.

The first video shows the prototype of the all-new i20N, with camouflage covering over its front and rear. One gets just partial glimpses of the new model’s details, as it drives across the snow.

In the second video, which includes additional scenes of the all-new i20 N prototype, Neuville provides commentary to the footage, describing what it’s like to drive each model and outlining the unique characteristics of each car from his perspective. Neuville tested the all-new i20N prototype by driving it alternating with the i20 WRC and RM19.

On the prototype all-new i20N, Neuville said: “Very interesting car. Very precise. Very easy handling. The engine is revving nicely and the noise is very interesting as well. I’m looking forward to get this one to drive in WRC!"

The testing took place earlier this year on a frozen lake in Arjeplog, Sweden, a popular winter testing ground for automotive manufacturers. The year-round deep cold makes it the perfect place for testing vehicles in extreme weather conditions. Some days, the temperature can drop to minus 30 degrees Celsius.

Hyundai tests its cars in harsh climates to make sure its vehicles can still perform in extreme weather conditions. From searing summer heat to icy winter roads, vehicles must be able to function in every climate condition in Europe.

In this test, Hyundai wanted to evaluate the reliability of the vehicles under extreme cold, as well as test their performance in motorsport-like conditions. The high speeds and sharp turns put the vehicles under a high amount of mechanical stress, proving their capabilities in tough conditions.

Following the success of the i30N and i30 Fastback N, Hyundai is developing a high performance version of its newest European model - the all-new i20N. As with other N models, the i20N will be racetrack capable and street legal.