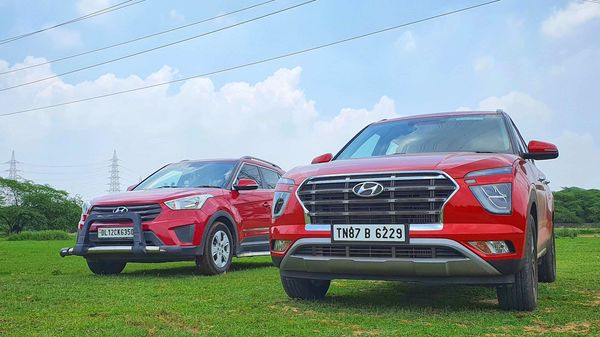 Creta has come a long way since it was first launched back in 2015 to the 2020 second-generation version. (HT Auto/Sabyasachi Dasgupta)

Hyundai Creta has managed to hit the half a million milestone in sales, in five years since it was first launched in India back in 2015. The SUV was an instant success in the market here at a time when Renault Duster used to dictate terms and although newer rivals have made boisterous claims in the segment, the second-generation Creta has been able to act as a catalyst yet again.

At a time when Hyundai was best known for its Santro, Creta emerged as the answer to those seeking an SUV. Its appealing looks, a feature-laden cabin and the option of reliable petrol and diesel engines - along with auto transmission, hit the right notes. The car received a facelift subsequently while 2020 saw the second-generation Creta breaking cover and offering design upgrades and an even more loaded cabin to take on a younger challenger in Kia Seltos.

While current market sentiments remain subdued, 2020 Creta has been the torchbearer of sorts for the Korean car maker and has also been the firm favourite on Hyundai's online platform as well. "Redefining the SUV landscape in India, Creta's supremacy transpires from Hyundai’s technological prowess and innovation, outperforming the industry benchmarks in all aspects," said Tarun Garg, Director - Sales, Marketing and Service at Hyundai Motor India, in a press statement issued Tuesday. "With the 500 000 sales mark, the Creta has set yet another benchmark in the industry, reaffirming a legacy of leadership in the SUV segment."

Powered by 1.5-litre MPi petrol (6-speed MT and IVT), 1.4-litre Kappa Turbo GDi petrol (7-speed DCT) and 1.5-litre U2 CRDi diesel (6-speed MT and 6-speed AT), Creta's strength lies in the number of options it comes in. Hyundi's post-sales service is also a key factor in the vehicle's success and while rivals continue to threaten Creta with offerings that have an impressive resume, the Hyundai vehicle possibly benefits most from being a proven warhorse with a brushed mane and on a fresh dose of steroids.