Development of the Hyundai AX1 micro-SUV is being carried out in South Korea. The production-spec Hyundai AX1 could make its public debut sometime in 2021.
By : HT Auto Desk
| Updated on: 16 Dec 2020, 03:12 PM 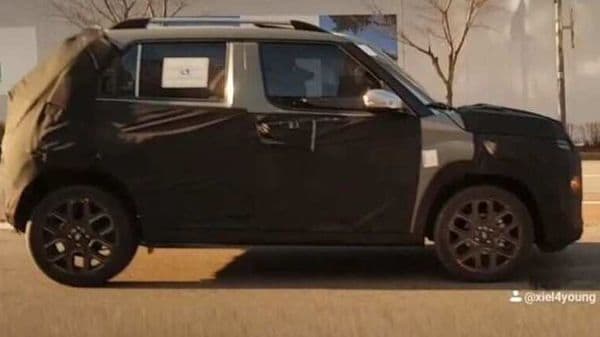 Hyundai is developing an all-new micro SUV codenamed AX1. The concept model of the Hyundai AX1 has been showcased publically a while ago and the production version of the same is bound to arrive sometime in 2021. It is going to be placed below the Hyundai Venue in automaker's global lineup and will comeout to be the smallest SUV produced by Hyundai till date.

Now the pint-sized SUV has been spotted doing rounds in South Korea in a heavily camouflaged avatar. The car retains the original boxy silhouette as found on its concept model, and it won't be wrong to say that from certain angles it appears to be a jacked-up version of the Indian-spec Maruti Ignis.

Over the sides, it has been given flared-up wheel arches which adds to its masculine stance. It can also be seen equipped with a set of roof rails, a broad B-Pillar, swanky looking alloy wheels, and body cladding all around. As found on most of the new Hyundai SUVs, the AX1 will most-likely come kitted with a large cascading grille up front flanked by a split LED headlamp setup.

Inside, expect it to come kitted with modern comfort and convenience features including a touchscreen system with Apple CarPlay and Android Auto, a digital instrument console, rear parking camera, auto climate control, and more. Chances are that the automaker might also slap it on with its BlueLink Connected car tech to make it more appealing.

While initially, the car is expected to roll out as a petrol-only offering, Hyundai might also introduce an electrified version in the years to come. More details on the AX1's mechanicals will be revealed in the days to come.

The new spy image suggests that the AX1 is close to its final production stage and could make its public debut sometime in 2021.