The new Hyundai Aura CNG variant now sits above the S CNG variant. It will take on rivals like the Tata Tigor CNG sub-compact sedan.
By : HT Auto Desk
| Updated on: 23 Jun 2022, 09:56 AM 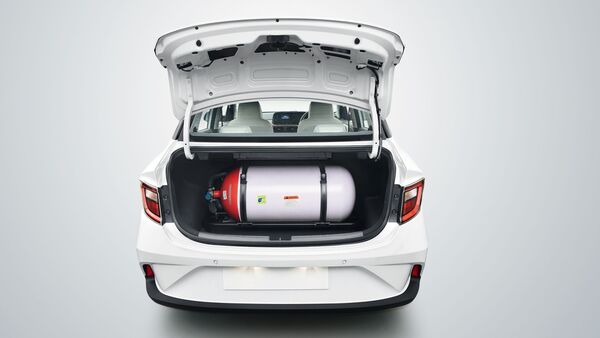 Hyundai has launched the SX variant of the Aura CNG at ₹8.56 lakh (ex-showroom)

Hyundai Motor has launched a new variant of the Aura sub-compact sedan with CNG. The Korean carmaker has officially introduced the new Aura CNG variant in the SX trim, which comes with the 1.2-litre Kappa Dual VTVT Bi-Fuel petrol engine. The Hyundai Aura SX CNG variant is priced at ₹8.56 lakh (ex-showroom). Earlier, Hyundai used to offer the Aura CNG models only in the S CNG variant with the same engine. The new variant is now the top-of-the-range CNG model from the carmaker which will have several features compared to the lower variant.

Among the added features the new variant of the Hyundai Aura CNG will get are the 8-inch touchscreen infotainment system, a reverse parking camera and 15-inch dual-tone alloy wheels.

Hyundai Aura CNG sub-compact sedan is only a few among the rivals in the segment to offer dual-fuel options. Recently, Tata Motors had launched the Tigor sub-compact sedan with CNG to tap the growing number of CNG vehicle customers in India. Hyundai's decision to launch a more feature-packed Aura CNG variant is aimed to take on the Tata rival model. Maruti is the only other carmaker to offer CNG in a sub-compact sedan. However, Maruti offers the Dzire CNG only in lower trims.