Honda e is the Japanese carmaker's first all-electric car.The Honda e has a battery capacity roughly half that of the Model 3, driving just 280 kilometres per charge.
By : HT Auto Desk
| Updated on: 18 Nov 2020, 16:44 PM 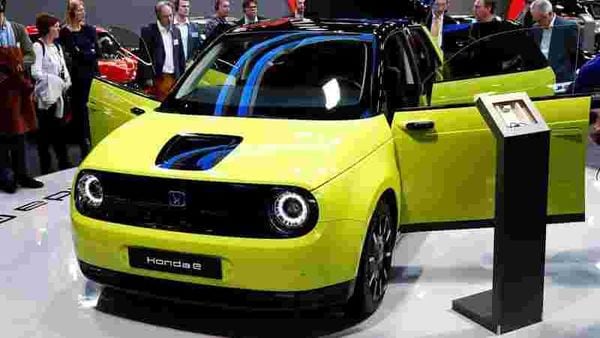 The Honda e has a battery capacity roughly half that of the Model 3, driving just 280 kilometres per charge. (File photo)

Japanese carmaker Honda Motor's first all-electric vehicle for Europe, the Honda e, has been named ‘German Car of the Year 2021’ in the country’s prestigious annual Car of the Year Awards. Honda e has become the first car from a Japanese brand to win the award besides also winning in the ‘New Energy’ category.

The Honda e, released in Europe earlier this year in August, is a compact model meant solely for city driving. That contrasts with Tesla Inc, whose Model 3 sedan dominates the battery EV market, and others such as Audi AG and Hyundai Motor Co that have focused on SUVs with long driving ranges.

The Honda e has a battery capacity roughly half that of the Model 3, driving just 280 kilometres per charge.

With a retro, ultra-compact design evoking Honda's classic N360 and N600 models from the 1960s, the two-door Honda e is intended as an upmarket city car, whose price tag of around 33,000 euros ($39,000) is higher than Renault's Zoe ZE50, which is roomier and has a longer driving range.

Since its launch, the Honda e has won a few awards so far, including the top honour in the Red Dot Design Awards.

"For Honda e to be the first Japanese car to be awarded German Car of the Year is a great honour and one we are incredibly proud to receive," said Katsuhisa Okuda, CO & President of Honda Motor Europe. "Customer and media response to the Honda e since it was first unveiled has been overwhelmingly positive. The Honda e is a perfect example of a product with a unique design, featuring cutting-edge technology and advanced intelligent connectivity to keep owners connected with their everyday life. We are very thankful for this award."

The Honda e is one of the key models in Honda's aim to electrify 100% of its European mainstream models by 2022. The model will only be sold in Europe and Japan, where it goes on sale in late October. Honda expects annual sales of only around 10,000 in Europe, and 1,000 at home, where it will also introduce the model into its car-sharing fleet.