Honda CR-V SUV leaked ahead of debut, may get City's e:HEV hybrid tech too

The sixth generation Honda CR-V SUV is likely to make its debut by the end of this year. The images of the SUV was leaked on Chinese websites revealing the looks for the first time.
By : HT Auto Desk
| Updated on: 13 May 2022, 03:46 PM 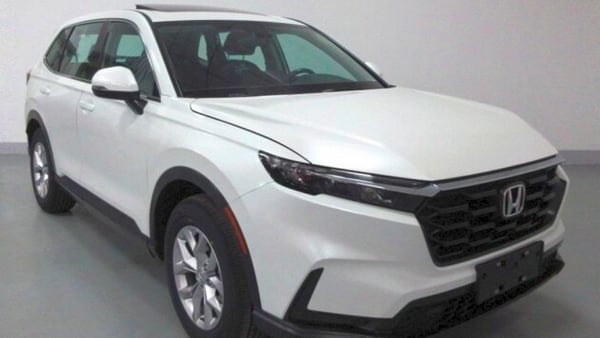 The sixth generation Honda CR-V SUV is likely to make its debut by the end of this year.

Honda is gearing up to introduce the new generation CR-V SUV for the Asian markets soon. However, even before any announcements, images of the SUV has been leaked online through China’s Ministry of Industry website. The sixth-generation Honda CR-V SUV is likely to make its debut some time later this year. The launch is expected to take place early next year. However, it is unlikely that Honda will consider bringing it to India any time soon.

The latest Honda CR-V now uses a fresher design than the previous generation. In fact, at first glance, the appearance of this car resembles the younger brother that was launched first, namely the Honda All New BR-V.

At the front, the new Honda CR-V uses an inverted trapezoid grille combined with headlights with an elongated flat shape. There are also chrome elements that extend along the lights and grille which make the car look more stylish.

At the sides, the ORVMs have been redesigned to significantly reduce blind spots. At the rear, the SUV gets L-shaped LED taillights as well as double muffler exhausts.

There are no hints at what changes the SUV will undergo as far as the interior is concerned. However, expect features seen inside latest Honda models like HR-V and BR-V to make their way into the new generation CR-V too, and some more.

The new CR-V is likely to get the old 1.5 litre VTEC Turbo engine. However, it is likely to offer enhanced output compared to the outgoing fifth generation model which churns out 193 PS and 243 Nm. Besides this, Honda may offer two hybrid options in the new generation CR-V. First of them is the e:HEV hybrid technology which has made its debut in India through the new Honda City Hybrid. The other could be a plug-in hybrid variant, similar to the e:PHEV version of the model sold in China since 2020.