Home Auto Cars News Have $125k? This Aston Martin Db5 With Machine Guns Can Be Yours

Have $125k? This Aston Martin DB5 with machine guns can be yours 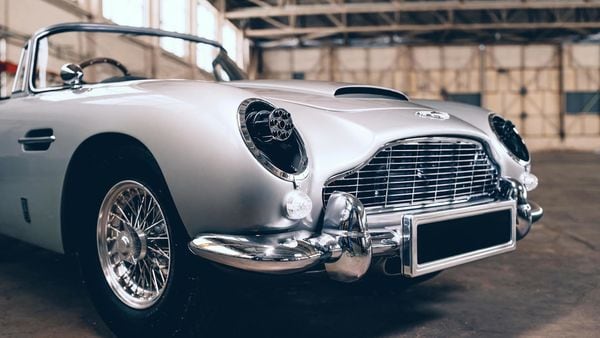 The car gets fake machine guns hidden in headlamp consoles.

British luxury car marquee Aston Martin is very much synonymous with the famous spy character James Bond. If we talk about particularly one car, Bond's favourite is the Aston Martin DB5. This iconic car now comes in an avatar just like the one 007 drove in many of his movies. This toy car gets some cool equipment onboard.

(Also Read: Aston Martin unveils 1:1 replica of Corgi DB5 ahead of ‘No Time To Die' premiere)

The Aston Martin DB5 costs a whopping $125k. That's actually enough to buy a used real Aston Martin. However, there would be a host of equipment onboard this special model.

Among the funky equipment are smoke guns, fake machine guns that come out from headlamp consoles. The smoke guns can emit fumes through fake rear exhaust for half an hour.

The pair of Gatling guns are revealed when headlights are dropped. They’re not actual guns though. The manufacturer claims they feature ‘imitation barrel blasts and flashes’ to complete the effect.

Manufactured by The Little Car Company, the car has a series of switches located in a hidden panel in the passenger door. Drivers can activate a revolving number plate, just like the car featured in the movie. There is a ‘skid mode’ to help the driver to pull off donuts, as seen performed by a full-size DB5 in the trailer for the upcoming movie.

The company claims that this model gets a drag racer-style line lock that nips up the front brakes. It gets a 16 kW motor onboard. However, the car doesn't get another popular feature of Bond's DB5, the ejector seat.

There is a standard version of the DB5 as well. It comes priced between $48,600 and $62,500, depending on the power of the motor. The Aston Martin DB5 was seen completely destroyed in the movie Skyfall. However, the upcoming Bond movie No Time to Die will see the return of the DB5 in a completely revamped avatar.