The luxury sports car was left smashed from all sides with orange graffiti marks all over its body.
By : Sabyasachi Dasgupta
| Updated on: 04 Jun 2020, 12:10 PM 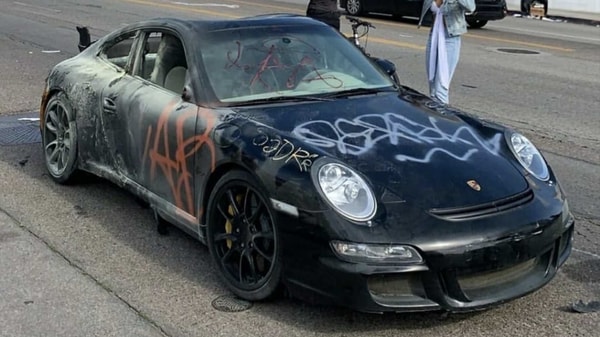 The damaged Porsche 911 GT3 RS on the streets of Los Angeles during protests over the killing of George Floyd. (Photo courtesy: Instagram/supercar.fails)

United States has been witnessing a wave of protests across the country over the death of George Floyd in Minneapolis on May 25. There have been several instances of rioters vandalising properties, including car showroom, in several cities in the United States.

The latest incident was recorded in Los Angeles, where a very expensive and rare model of the Porsche 911 series was vandalised by a group of protesters.

The images and videos of the damaged Porsche luxury sports car were shared on YouTube and social media platform Instagram by users.It shows how protesters smashed glass windows and doors of the black Porsche 911 GT3 RS.

The roof of the car caved in probably due to people climbing on top of it and smashing it with heavy objects, or possibly due to people jumping on top. The windows at the rear and the sides were also completely damaged. The whole car was painted with orange graffiti and left on the road.

There is no confirmation what happened to the owner of this expensive luxury sports car. At one point in the video, someone was heard saying that the car did not have a key, indicating the owner might have escaped from the crime scene by carrying the key so that no one could steal the car.

Last week, several vehicles inside a Mercedes-Benz showroom in California's Oakland were vandalised and reportedly damaged when rioters broke in during clashes over the death George Floyd. A video of rioters breaking into the dealership also shows some of them climbing on to the Mercedes cars and kicking the windshields violently. A few of them also end up jumping on these vehicles.

Porsche 911 is a very rare GT3 RS model. The company was recently spied testing a new model of the car which is likely to be launched soon. The damaged car had gloss black wheels and yellow brake calipers. The GTR3 RS models are powered by a 4.0-litre, naturally aspirated flat-six engine. It can generate 520hp of power at 8,250rpm. It can accelerate from zero to 100 kmph in just 3.2 seconds.