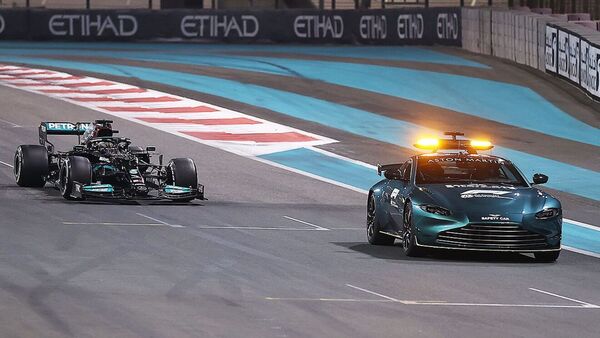 Formula 1 governing body FIA had dismissed criticism of its Aston Martin safety car being too slow..

Formula One's governing body has dismissed criticism of the Aston Martin safety car for being ‘too slow’ during races. On Thursday, FIA said top speed of the safety car is not a matter of concern after reigning world champion Max Verstappen compared it to a turtle. Aston Martin, along with Mercedes-AMG, provide safety and medical cars for Formula 1 Grand Prix races.

"The FIA would like to reiterate that the primary function of the ... safety car is, of course, not outright speed but the safety of the drivers, marshals and officials," it said in a statement.

Red Bull's Max Verstappen, who won the F1 championship for the first time in 2021, had said that the Aston Martin 4.0 litre twin-turbo V8 Vantage used at the Australian Grand Prix in Melbourne last Sunday lapped too slowly when deployed following crashes.

"For sure the Mercedes safety car is faster because of the extra aero. The Aston Martin is really slow. It definitely needs more grip, because our tyres were stone cold," said Verstappen, who could not finish the race.

Ferrari's Charles Leclerc, who is currently leading the championship, said he had also wanted to go faster. "I wanted to complain, but then I checked how much the safety car was sliding in the corner and I don't think there was anything more that he could give so I didn't want to put too much pressure. With the cars that we have now it's very difficult to keep the temperatures in the tyres behind the safety car."

British racer George Russell, who is serving his first season for Mercedes-AMG Petronas, said the German marque's safety car was about five seconds a lap quicker than the Aston Martin.

The FIA said safety car procedures took into account multiple factors, including the need to bunch up the field and adjust the pace depending on recovery activities. "The speed of the safety car is therefore generally dictated by race control, and not limited by the capabilities of the safety cars," added the governing body.

"The impact of the speed of the safety car on the performance of the cars following is a secondary consideration, as the impact is equal amongst all competitors who ... are responsible for driving in a safe manner at all times."

The Aston Martin DBX Medical Car enjoys an output of 550PS of power and 700NM of torque. It is capable of sprinting from zero to 100 kmph in just 4.5 seconds and can reach a top speed of 290 kmph. Mercedes-AMG GT Black Series used in Bahrain and Saudi Arabia produces some 730bhp.