Force Motors had launched the off-road SUV in September last year at a starting price of ₹13.59 lakh (ex-showroom). In its new generation, the Gurkha has been upgraded with design tweaks and tech to rival Mahindra Thar SUV.
By : HT Auto Desk
| Updated on: 07 Jan 2022, 12:30 PM 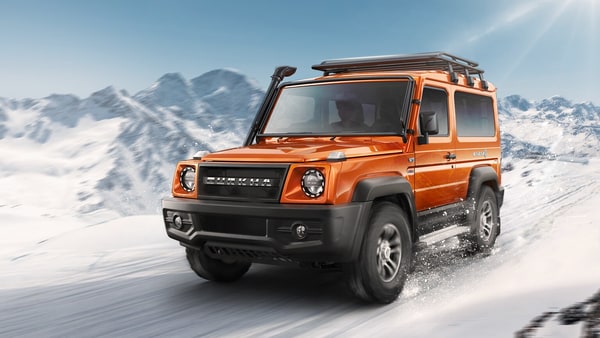 Force Motors has hiked price of its 4X4 off-road SUV Gurkha from this month, According to its official website, the starting price of Force Gurkha SUV has been revised to ₹14.10 lakh (ex-showroom). It is an increase of ₹51,000 over the price at which the SUV was launched last year.

Force Motors had launched the off-road SUV on September 27 at a starting price of ₹13.59 lakh (ex-showroom). In its new generation, the Gurkha has been upgraded with design tweaks and tech to rival Mahindra Thar SUV.

The second generation Force Gurkha SUV now appears more of an adventure lifestyle vehicle with the introduction of several creature comforts and modern features. The SUV now sports a bolder look with a new front grille. It is flanked by circular bi-LED headlamps and LED DRLs which sit above the new set of fog lamps. On the sides, it has 16-inch alloy wheels placed within the pronounced wheel arches with black claddings. It also gets a functional snorkel which helps the Gurkha with a water-wading capacity of 700 mm. At the rear, Gurkha gets a new new set of taillights as well as a ladder to access the roof-mounted luggage carrier.

2021 Force Gurkha SUV comes with an upgraded BS 6 compliant 2.6-litre diesel engine mated to a 5-speed manual gearbox. However, Force Motor does not have any plan to offer the SUV with an automatic transmission yet.

Under the hood, 2021 Force Gurkha comes with a 2.6-litre diesel engine which used to power the previous generation model as well. It can generate a maximum output of 89 bhp and 250 Nm of peak torque. The 2021 Gurkha is be offered with an AWD option. Force has also tweaked the suspension setup with double wishbone and coil springs. It can also crawl up gradients of 35 degrees.