Force Gurkha, rival to Mahindra Thar, likely to launch ahead of festive season

Force Gurkha SUV is an off-roader and will take on rivals like Mahindra Thar in the niche segment.Force Motors had showcased the new generation Gurkha during Auto Expo 2020.
By : HT Auto Desk
| Updated on: 18 Jun 2021, 10:06 PM 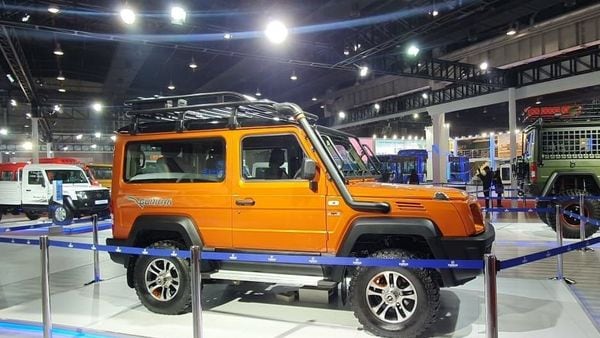 Foce Gurkha was unveiled as competition to Mahindra Thar during Auto Expo 2020.

Force Motors has given the clearest hint at the launch timeline of its new generation Gurkha off-road SUV. The carmaker recently confirmed that the Gurkha SUV is going to be launched in the third quarter this year, which means any time between July and September.

Force Gurkha SUV's launch ahead of the festive season will mean the new generation Mahindra Thar will get its first real rival in the Indian market since its launch last year.

Force Motors had showcased the new generation Gurkha during Auto Expo 2020. The SUV will be powered by a BS 6-compliant 2.6-litre diesel engine. Mated to a 5-speed gearbox, the engine will be able to churn out 89 bhp of maximum power. It will get an all-wheel-drive system to excite the adventure enthusiasts. One of the key highlights of the SUV includes its independent front suspension and a rigid axle at the rear.

The exterior looks as rugged as ever, as Force Motors has tweaked it to match with the bolder with modern elements, just like Mahindra revamped its iconic Thar SUV in its latest iteration. The Gurkha SUV, showcased at the Auto Expo last year, has circular headlamps with integrated LED daytime running lights, a snorkel, turn indicators placed over front fenders, and a tailgate-mounted spare wheel.

Thank you very much for your interest. Please bear with us for some more time. The All- new Gurkha will be on the roads by the next Quarter. Stay tuned to our page for updates!

Inside, the new generation Force Gurkha off-road SUV will come equipped with a new touchscreen system, captain seats for the second row, and side-facing jump seats at the rear. The cabin is likely to get an all-black dashboard, circular air vents with black surrounds and a three-spoke steering wheel. An A-pillar mounted grab rail, square-shaped and glove-box are among some of the other features expected in the new Force Gurkha.

When launched, Force Gurkha will take on Mahindra Thar. The segment may also see a three-way rivalry when Maruti Suzuki decides to launch the Jimny SUV, which may not happen before next year.