With a much simpler presentation compared to last season, the Maranello team unveiled the new SF21 car that will be driven by Spaniard Carlos Sainz and Monegasque Charles Leclerc.
By : HT Auto Desk
| Updated on: 11 Mar 2021, 11:05 AM 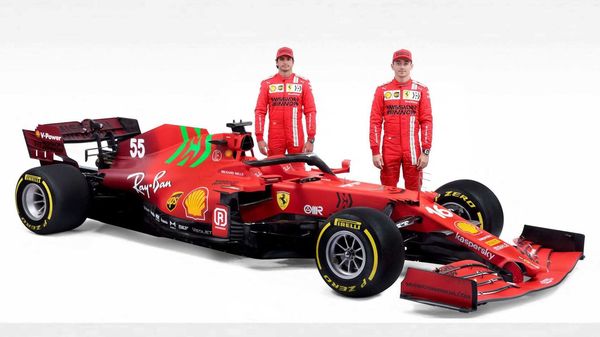 Ferrari has presented the SF21, its latest F1 racing car with a completely new power unit and gearbox and improved aerodynamics, with which the Spaniard Carlos Sainz and the Monegasque Charles Leclerc will face the 2021 Formula 1 World Championship.

If last year the Maranello team organised a spectacular ceremony at the Valli Theater in Reggio Emilia, the city where the tricolour of the Italian national flag was born, with orchestra, choir and ballet dancers, this year's presentation was far simpler in the face of the coronavirus pandemic.

The president of Ferrari, John Elkann, the director of the team, Mattia Binotto, and the mechanics insisted on the 'responsibility' that comes with representing the Italian team and on their desire to forge together with Carlos Sainz and Leclerc a group worthy of the memory of Enzo Ferrari, the founder of the ‘Prancing Horse’.

"The SF21 was born from last year's car and we tried to improve it in all its parts, in aerodynamics, a completely new power unit," said Binotto, who recognised in recent months that the great goal of his team is to reach the highest competitive level. to the 2022 season.

Visually the amaranth-coloured rear area stands out, inspired by the first Ferrari, the 125S from 1947, a car from which the legend of the Italian team originated.

Ferrari had already used this colour last year on the occasion of the Mugello GP, to celebrate the 1000 races of its team.

Also the tricolour, green, white and red, of the Italian flag appears on the front next to the Ferrari shield.

One of the key highlights of the car is its engine. The mechanics designed the 065/6 power unit, with more thermal efficiency, which will allow to gain a tenth of a second per lap, a job in the turbocharger and a superior energy recovery.

At the r, the mechanics built a new gearbox and some new suspensions, in addition to providing improvements in the cooling system.

Little changed in the previous area, where the chassis and suspensions are the same as the SF1000.

Sainz and Leclerc, who are in Bahrain in view of the start of the World Championship on March 28, expressed their satisfaction with the new car and assured that from this Thursday they will start rolling.

"We are about to take our first laps, about ten each, and then from Saturday we will start working seriously," said Carlos Sainz in a video published by Ferrari with Leclerc.

The Italian team also express their satisfaction with the atmosphere that has been created between the two riders in this pre-season phase, something of great importance in order to achieve good results on the track.

“Sainz and Leclerc already do many meetings together, they work as partners. It is true that it is easy to have a good relationship during the preseason, but it seems that they are enjoying their moments together and this is a good starting point, "said Laurent Mekies, Ferrari sports director.

A line shared by the president, Elkann: “It was good to see how Charles and Carlos have contributed to the preparation of the season with the mechanics. Everyone is ready to launch the car and do their best."