Ferrari pitches $500,000 hybrid supercar as a bargain for daily driving 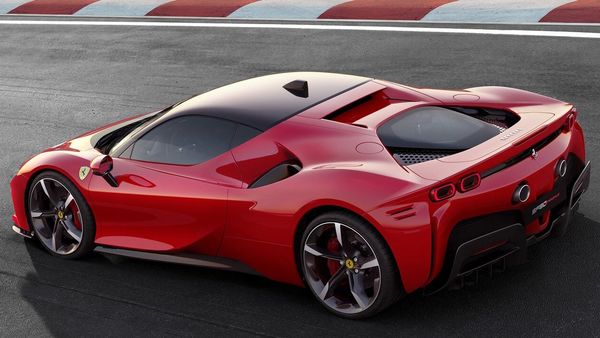 The sheer power of the car makes it fast, the Formula 1 derived engineering makes it precise, and the sound and feel of the blasting V8 when it kicks into gear make it a highly emotional experience.

The main thing Ferrari will tell you about the 2021 Ferrari SF90 Stradale is how much of a bargain it is.

The arithmetic requires some squinting around the edges of elitism and a healthy injection of relative logic. It goes like this: The two-door coupe is the second hybrid from Modena, Italy’s crown jewel, the first being the La Ferrari of 2013. That car, which had 950 horsepower, cost more than €1 million ($1.2 million) when it debuted, and examples today sell for $4 million (and an additional million for the convertible version). The new SF90 Stradale, with 986 horsepower, starts at the breezy bargain-basement price of $507,300. (One fine distinction: The SF90 is a plug-in hybrid, while the LaFerrari does not plug-in.)

And while the La Ferrari was limited to 499 units sold, plus one auctioned for charity, the SF90 is a veritable car for the masses, with no production limit set at all. So, see? Big deal! Huge.

Well. A test drive of Ferrari’s new hybrid across Los Angeles on May 19 did not convince me that this half-million-dollar machine spells a new era of budget-friendliness at the 81-year-old brand. But with an on-the-road dynamism born of the most advanced integration I’ve ever experienced with electric or conventional power, it does convince me that the future of the brand is in good hands. Those who can afford the price tag have much to anticipate.

First: If you buy the SF90 Stradale, expect it to split your friends between those who offend you with blunt comments and those who lie to your face. It is a polarizing car, which has everything to do with how it looks—not about the powerplant, which I’ll get to momentarily.

Post a photo on social media, or plow through Beverly Hills traffic, and you may be told that it looks just like everything from the Alfa Romeo 8C (along the hips) to a generic Lotus (along the upper rear portion)—or even just that it stole McLaren’s headlights and a Lamborghini nose (unfair). And then there will be a host of smart alecs who find themselves duty bound to grace you with their totally original and really brilliant observation that it looks like the Chevrolet Corvette C8. Funny thing: When I drove the C8 in Las Vegas in 2020, the same hyper members of said peanut gallery felt they absolutely must point out how much that ‘Vette looked just like a Ferrari. Good job, guys!

I actually like how the car looks, especially in my favorite “Bianco Cervino" white, though from some angles—especially in photos—the haunches may look too thick for some people’s taste.

This car is extreme in every way, so of course that’s reflected in its styling. Eat this: With 1000cv and at a dry weight of 3,461 pounds, it has a weight-to-power ratio of 1.57 kg/cv and produces 390 kg of downforce at 250 km/h—which, for the first time ever at Ferrari, puts a V8 engine, not a V12, at the most powerful and fastest of the production model range. It adds an eighth gear to the dual-clutch automatic transmission and adds 20% torque over its predecessor, but the gearbox still weighs 10kg less. It has brand-new actuation hydraulics that cut clutch times to 200 ms. (Compare that to the 488 Pista’s 300 ms.)

Meanwhile, a high-performance Li-ion battery provides power to all three motors and guarantees a 25 kilometer (16 miles) range in all-electric mode, using just the front axle. Top speed is 211mph; it can go to 62mph in 2.5 seconds. The push to such great speeds feels instant; thank the electric motor gods for that.

The split nose and upturned grin of the hood, the dorsal fin on the roof, the unique placement of the rear air vents, and the big lip on the rear assist its spaceship-like speeds. The fan-like blades of the aluminum wheels work to cool the brake calipers while looking … cool. I love a two-for-one form and function party.

Fumbling Through the Futuristic Interior

For my half-day test drive, I piloted a SF90 Stradale in the track-ready “Assetto Fiorano" configuration, which includes such significant upgrades as special GT racing-derived shock absorbers, Michelin Pilot Sport Cup2 tires, racing seats with manual and limited ergonomic adjustment capability, door panels made from carbon-fiber, and a titanium exhaust line. (Together, they reduce 30kg [66 lbs] of weight). It also came with the carbon fiber rear spoiler that helps generate that 390 kg of downforce.

On the downside, the track package does not offer the lift system that raises the nose of the car infinitesimally to help ease it over driveway dips and the like, which is a big reason not to buy the $56,240 extra required to have the package. The cost to replace scraped facia on the SF90 will easily crest multiple thousands of dollars, but the biggest expense will be the time lost while the car sits in the shop.

And since this is a bargain car (as Ferrari’s pro driving instructor tells me) suitable almost as a daily driver for some customers, while the truly special Ferraris sit in the garage, we might as well forgo upgrades that cost money while adding inconveniences.

Speaking of inconvenience, don’t get me started on the new dashboard, digital instrument cluster on a 16" curved high-definition screen, and control configuration system in the car. Talk about annoying. Here, Ferrari has added a “Human-Machine Interface" that is a complete departure from previous models; you, like me, will be forced to use a tiny square touchpad on the steering wheel and a series of haptic buttons to control virtually every aspect of the car—with your thumbs.

Even the start process for the SF90 Stradale takes some adjusting; it requires touching an icon on the steering wheel once, then twice. Since the car is so quiet when it starts (hybrid, bro) it can be confusing to know after the first touch whether it has started or not. This results in more tapping, then a push—and before you know it, the car has turned itself off.

Adjusting the side mirrors via a touchscreen implanted on the side of the steering wheel. Throwing the car in reverse via a tiny “What is this thing, made for ants?!" strip of metal meant to resemble an old-school gated shifter in the center console. These are not fun things.

Thankfully, the “Manettino" dial on the steering wheel is still knob-oriented, though it has been half digitized as it scrolls through electric vehicle dynamics modes—and is now supposed to be called the “eManettino," says Ferrari.

A Bolt of Electric Lightening

There are also four driving modes in the SF90 Stradale—EV, Hybrid, Performance, and Qualify, which bring us to the place where this car excels: driving. Because you are going to want to really drive this hybrid sucker and keep driving it for a long time to come. I took it from Beverly Hills to the top of Angeles Crest and back, blasting the mid-engine V8 as I took sweepers up toward Route 2 as if they were made for go-karts.

Weird to say, I loved the brakes—sharp but not raw, calibrated to instill the maximum amount of confidence as I ducked the car into the most hairpin of turns—and the instant laser-precise steering was without rival. The visibility from the drivers’ seat exceeded that of many supercars of the same caliber; cabin noise was appropriately loud but not deafening. Don’t plan on storing anything in this car, ever. There’s really no room.

The sheer power of the car makes it fast, the Formula 1 derived engineering makes it precise, and the sound and feel of the blasting V8 when it kicks into gear make it a highly emotional experience. But I found that I liked using electric mode best when driving the SF90 in town. Somehow, it seemed more interesting, more progressive, more elegant, and more unique than the dirty old internal combustion engines it had left in the dust on the highway.

With an electric-only mode of 15 miles, it didn’t feel like a pure EV or a real bargain—but it certainly left me looking forward to more.