Ferrari 296 GTB with a hybrid V6 launched in India

Ferrari has launched its 296 GTB in the Indian market as a replacement for F8 Tributo. The 296 moniker comes from the engine displacement of the engine which is 2996 cc. Ferrari says that the 296 GTB is the first road car to come with a six-cylinder engine. It gets an all-new six-cylinder engine that gets hybridization to decrease emissions and increase power output. 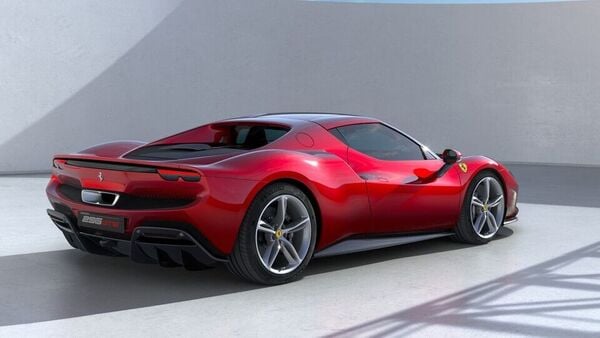 The 296 GTB gets a mid-engine, rear-wheel drive layout.

The engine comes mated to an 8-speed dual-clutch automatic transmission. Ferrari says that the 296 GTB will hit 100 kmph in just 2.9 seconds and 200 kmph in 7.3 seconds. It will top out at 330 kmph and will stop from 200 kmph to 0 kmph in 107 metres. Ferrari is using carbon ceramic disc brakes to reduce brake fade. The 296 GTB went around the Ferrari's Fiorano test track in 1 minute 21 seconds.

The supercar can go 25 km in pure EV mode and can achieve a top speed of 135 kmph. The battery pack has a size of 7.45 kWh which has been installed behind the seats for weight distribution. Being a plug-in hybrid, the battery pack can be charged via a charger in 1 hour.

The 296 GTB is the first Ferrari to get brakes by wire and electronic power steering. There are four driving modes that can be changed through the ‘eManettino’ dial placed on the steering wheel. The diving modes are Qualify, Hybrid, Performance and eDrive. Each driving mode alters various parameters.